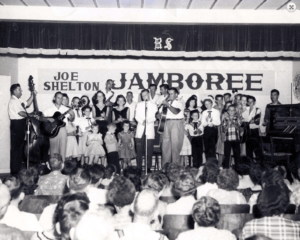 This weekend marks the 65th anniversary of the Reilly Springs Jamboree.

Hopkins’ Joe Attlesey aka Joe Shelton ‘and his Sunshine Band,’ as they were billed, gathered in the Reilly Springs one-room schoolhouse in 1956 to host Johnny Cash, June Carter, Johnny Horton, Ernest Tubb, Stringbean, Al Dexter, Roger Miller and more. Friends, musical associates and ‘pickers and grinners’ came from far and wide, and the crowd drew 850.
“The show was broadcast on Saturday nights from KSST in Sulphur Springs and packed the small school auditorium in Reilly Springs,” said the Jamboree organizers on their website.
For nine years the Jamboree was broadcast on Dallas’ KRLD Radio, and on its TV affiliate as “Country Picnic.” However, by 1965 the jamboree closed down. Joe Shelton and his band continued to play venues all over Hopkins, Northeast Texas and the south, such as Shreveport and Memphis, his wife noted in 2001 to the News-Telegram.
For many years the band was a feature of a downtown variety show and played the dairy festival.  Country legends such as Burton Harris and Merle Haggard mentioned the Sheltons as inspirations, and Joe was inducted into the Library of Congress in 1973. He was buried at City Cemetery in 1981.
In 2009, another local musician and radio personality became determined to revive the Jamboree. KSST’s Enola Gay Mathews and her Running Creek Band wanted the Reilly Springs Jamboree to come back in a big way.
“Jamborees have been held sporadically since the 1980s,” Mathews stated on the Jamboree website. In 2006, musicians Richard and Roger Reed returned home to Hopkins and contacted Mathews, as she had been holding smaller-sized jamborees for several years.
“[We] decided they’d try it as a team to restore the show’s history and heritage, and scheduled the first one for 2009,” she noted on the Jamboree website.
In the 12 years since its major revival, the Hopkins County Chamber of Commerce has recognized that the Reilly Springs Jamboree imparts community pride, and some band members who played with Shelton’s original Sunshine Band in the 1950s and 1960s sometimes make an appearance.
“It’s a piece of community history that is a connection to the people that helped form Reilly Springs and honors the people who helped to make our community,” newsman and Reilly Springs native Bobby McDonald told Mathews before his death.
“It’s a touch with the past and the people who are now gone from our community, and it’s great to remember a time in Reilly Springs when things were much simpler and life wasn’t near as hurried… We can’t go back – and probably wouldn’t want to – but we can still visit for a couple or three hours at a show and remember.”
Research compiled from Portal of Texas History, Reilly Springs Jamboree published materials, Hopkins County Echo, Sulphur Springs News Telegram, County Line Magazine, Front Porch News, original research.
By Taylor Nye