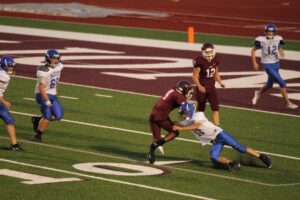 The Wildcats started strong with the first touchdown of the game in a 25 yard pass from Kaden Mitchell (1) to Drake White (19). He broke a good tackle to cross the plain. The team failed on the extra point, the Wildcats put up the first numbers with a score of 6-0.

Defensive let one slip by on the outside for an Ennis touchdown. They carried ball across the line again for two extra points. The score board showed 6-8 Ennis.

A little bit of give and take in the first quarter. Which resulted in a deep pass by Kaden Mitchell (1) to Drake White (19) for the touchdown. Making the score is 12-8 Wildcats. The freshman team failed to make the two point conversion. 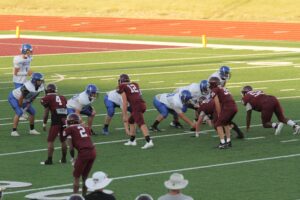 Handoff for Ennis for a 56 yard touchdown. Ennis runs it in for the two point conversion bringing the score to 12-16 Ennis.

The second half started with Sulphur Springs starting on the 25. A fourth down conversion brings the ball back to Ennis. A deep throw with a successful catch for Ennis resulting in a touchdown with a two point conversion. Bringing Ennis ahead 12-24.

Ennis ran in another touchdown and a two point conversion. The score was now 12-32 Ennis.

Late in the fourth quarter Kaden Mitchell (1) completed his third touchdown of the night to Skylar Lewis (16), making the score 18-32. Sulphur Springs failed on the two point conversion.

Despite giving up 32 points the young Wildcat defense played strong but unfortunately gave up three plays of over 50 yards. The final score was 18-32 Ennis. Next week is a bye week for the Wildcats. They will resume play on Thursday, October 7 with a game a The Prim. 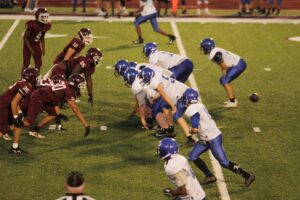