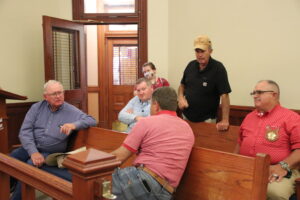 All Hopkins County commissioners and county judge are named in a lawsuit by Dike citizens, and some in the community are considering incorporation, among other notable items that occurred at an Aug. 26 afternoon special commissioners court session.

The session, which began at 1:03 p.m., opened with County Judge Robert Newsom informing those assembled that Dike citizen Cynthia Martin had filed a third amendment to her lawsuit and was now directly naming Newsom as well as Commissioners Pct. I Mickey Barker, Pct. 2 Greg Anglin, Pct. 3 Wade Bartley, and Pct. 4 Joe Price.

The suit, which alleges the court did not move properly to designate tax abatements for the proposed Dike solar farm and seeks for Martin to collect damages of $250,000 or more. The commissioners nor judge commented further on the suit.

The court then opened the floor to citizen comments. Dike citizen Pat Potts said that although he was “expecting the solar bunch to be there [commissioners court],” he believed whether or not solar panels were erected was a matter of personal liberty.

Potts also stated he had been approached via social media regarding incorporation for the Dike community, and he was against such a thing. Relative and Dike citizen Bo Potts stated he concurred.

Dike resident Wayne Ray added that “a group in Dike is really pushing for [in]corporation, and I don’t want to pay taxes.”

“Can you do that without asking citizens? Without an election?” Ray asked. “I don’t think I’m alone in not wanting someone to tell me I can’t cut a tree or what my neighbors can do on their property.”

Furthermore, said Ray, “They say they’re not going to raise taxes, but it costs to run a city.”

Newsom informed Ray that he was not aware what steps were included in the incorporation process, but that Rabe and any other interested citizens should contact county attorney Dusty Hyde Rabe.

“That’s our land and nobody’s saying anything,” Potts said. “I think they’re saying they’ve got names [support] whether they do or not.”