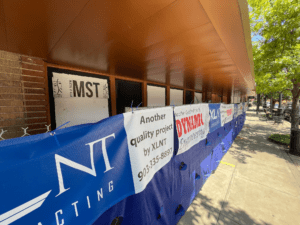 Hopkins County patrons of the arts have been sad to see downtown’s Main Street Theater boarded up during most of the COVID-19 pandemic. Yet fear not: beginning this Monday, the historic theater will see a total rehaul on its front and back façades.

The history of the Main Street Theater building dates back to the late 1800s, according to its historical records, when Sulphur Springs downtown area was first being developed. Although not the current building, by the year 1919, the building was the home of the Hopkins County Echo, and in 1957 an upholstery business was located there.

The Community Players were established much earlier than they have occupied their current building. In January 1978 they put on Sulphur Springs’ first dinner theater, located at the Civic Center banquet area. Subsequent productions took place at the SSHS gymnasium.

Outgrowing their wandering nature, the troupe moved into 225 Main Street in the fall of 1990. The local thespians put on a production of Charlie’s Chocolate Factory at the Fall Festival, and then took their show to the new building. According to all accounts, something beautiful was born. During this time, according to the group, over 1300 productions have been staged.

However, the building soon started to show its age.

“We’ve been watching it for years,” city manager Marc Maxwell said. “In mid-2018 they ran cables across the roof to tie the parapets and it delayed the inevitable.”

However, said Maxwell, “It’s time to do something permanent.”

In 2019, the troupe called on the city to examine the deteriorating roof as they began to fundraise for further structural and cosmetic repairs.

“The front and back walls of our building have deteriorated to a point that immediate action is required,” an April 2021 release by the group noted.

Throughout April the theater was in talks with city council to secure funds, and during August 2021 budget sessions, the city council moved forward to provide $250,000 for repairs to the theater.

However, with a generous gift from local construction firm XLNT, the city will now spend only $170,000 as the contractors are donating their time to the theater’s rescue.

The theater also has ongoing fundraising efforts, and according to their GoFundMe account have raised $845 of their $150,000 goal.

“Right now, there’s not much to see,” Community Players admits. “The outside is boarded up with plywood, a colorful promotional poster for its recent virtual performance of two Shakespeare classics pinned to them.”

However, to those who find their second home there, the space is “a place for entertainment and reconnection.”

The players highlight their role as both a childrens’ and adults theater, noting that it is “a platform for the performing arts [designed to] bring together a community of all ages.”

The theater will continue to remain open during its renovation, putting on two events per month, according to city manager Marc Maxwell. Construction may take up to two months, Maxwell said, and a grand opening is planned for 2022, according to the group’s page.

“We’ve always known that the downtown is all the more vibrant before and after the show,” Maxwell said. “It’s  a noticeable difference. We want to expand it. We’d love there to be other events– comedy, poetry, music. We want something going on there.”

Maxwell says that although the city is focused on the front and back facade for safety reasons, the theater could wholeheartedly use more financial support.

“This is indeed not just a theater building, but a whole world, and one that is worth saving,” the group said.