The Sulphur Springs city council held their first session to examine the 2021-2022 budget, reviewing water, sewer and garbage rates as well as taxes and fund balances.

The proposed budget for the city for the upcoming year is $35.4 million, an increase of nearly $3 million from last year’s budget and $5 million from 2019. However, a tax increase is not proposed in the new budget, according to city finance director Lesa Smith.

The budget increase will be used to give city employees a 3% cost-of-living raise, Smith said, and to provide $30,000 in salary increases for select fire department employees. 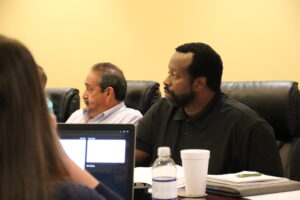 Council member Doug Moore inquired as to whether this would make it “more difficult to leave,” and Mayor John Sellers replied yes, he believed increased cost of living, paired with better use of insurance by employees and possibilities for higher salaries “could make some folks stick around.”

“There are firefighters who compare salaries and say ‘I’m getting this’… so we’re able to keep some,” said human resources director Gordon Frazier.

Smith noted that the city collected sales tax that reflected “pre-pandemic levels” and marked a 9.38% raise over this time last year.

“Sales tax is budgeted conservatively because we have no control over the various markets,” Smith said. “At times it may be unpredictable.”

However, the city is proposing an increase in water (2%), sewer (2%), and trash (5%) rates, in order to remain current with rising prices, Smith said.

“The truth of the matter is, once you factor in all the overhead, it’s a wash,” said city manager Marc Maxwell.

“We’ll probably have to do what we’ll have to do,” Sellers agreed.

The proposed changes would raise bills by an average of the following amounts: water (16 cents), sewer (55 cents) and garbage (62 cents). 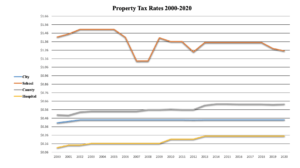 Property taxes per year since 2000

The next largest items in the proposed budget were $1.7 million for street repair and drainage and $250,000 for repairs to the Main Street Theater.

While Maxwell noted that the city would receive just over $4 million from the American Recovery and Reinvestment Act, the city plans to use this money on improving water infrastructure, he said.

“We’re in pretty good shape,” he said. “Coming out of COVID, we thought it would be a lot worse. From a tax standpoint it’s a pretty affordable point to live. We do our best to keep taxes and rates low and it shows in the numbers.”