Home Local News The percentage of Texans testing positive for COVID-19 is dropping, but experts say the threat isn’t over
Local NewsTexas News

The percentage of Texans testing positive for COVID-19 is dropping, but experts say the threat isn’t over 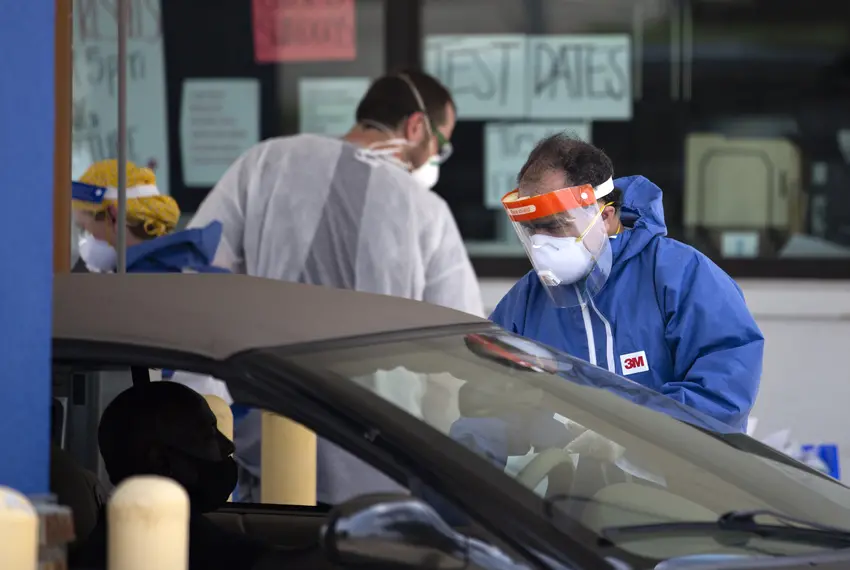 Positive COVID-19 cases are declining, but public health experts warn the threat is far from over. Credit: Shelby Tauber for The Texas Tribune

The number of positive COVID-19 tests in Texas has continued to fall to a level not seen since cases began to spike in June, a trend that has public health experts cautiously optimistic even as they warn that the threat is far from over.

The positivity rate — the proportion of positive tests — fell to 7.58% for the week ending Sept. 8, according to the Department of State Health Services. That’s down from a peak of 24.5% in mid-August and below the 10% benchmark Gov. Greg Abbott called “warning flag” level. The rate remains above the 5% threshold that experts and the World Health Organization recommend reaching before governments relax restrictions.

Meanwhile, experts fear that students returning to schools and gatherings during Labor Day weekend could trigger another resurgence and say aggressive testing is necessary to keep the virus at bay.

“All the metrics look to be going in the right direction, but we’re still at a tenuous point where one wrong move could send us skyrocketing,” said Angela Clendenin, an epidemiologist and biostatistician at the Texas A&M University School of Public Health. “We’re not out of the woods.”

Overall the state is on the right track, Clendenin said. But the risk remains high in a number of counties, especially in low-income communities along the Texas-Mexico border.

Abbott last month said bars could potentially reopen if the positivity rate remains below 10% for a sustained period of time. But Catherine Troisi, an infectious disease epidemiologist at UTHealth School of Public Health in Houston, cautioned against loosening restrictions before the coronavirus is under control.

“It’s going to be important to open up gradually so that we can study the effects and be ready to ramp down again if we see that we’re getting a big increase in cases,” she said.

Coronavirus testing in Texas plummeted last month, and a series of reporting discrepancies has raised questions about the reliability of the state’s data. Part of the decline could be fatigue, experts said, as people become less likely to seek out tests, especially those who are asymptomatic or have only mild symptoms.

Clendenin said widespread testing is essential to controlling the spread of the coronavirus, especially as health officials assess the impact of students returning to school.

“When you’re trying to mitigate disease, the best tool is testing everyone possible,” she said. “That’s the only way we can catch all the positives, get them isolated and do contract tracing.”

The rate of new hospitalizations, another metric to judge the magnitude of the outbreak, is likewise back to levels last seen in mid-June. The state reported 3,064 patients hospitalized with COVID-19 on Thursday. At its peak, Texas recorded nearly 10,100 hospitalizations in a single day in late July.

Part of that decline is a shift in new cases toward a younger demographic, said Rajesh Nandy, a professor of biostatistics and epidemiology at the University of North Texas Health Science Center. Cases are rising among those ages 18 to 25, who are less likely to be hospitalized.

In North Texas, that might explain a decrease in hospitalizations despite a relatively constant number of infections, Nandy said.

University administrators have tried to crack down on large student gatherings, most of them at off-campus parties and fraternity and sorority recruitment events that have drawn large crowds.

The University of Texas at Austin reported Wednesday that 100 people in three clusters tested positive for COVID-19. Since the start of the fall semester on Aug. 26, university officials have identified 320 cases among students and staff.

“We’re headed in the right direction, but I do think there is still a significant risk of having serious problems if the 18- to 25-year-olds don’t understand the consequences of transmission,” Clendenin said. “The risk is not to them, it’s who they’re transmitting it to.”

Officials are also watching to see whether Labor Day weekend gatherings will accelerate the virus’ spread in Texas. That’s what happened after Memorial Day, when cases spiked, especially among people in their 20s. From May 25 to June 25, the state reported 75,000 new cases of the virus, more than twice the number of cases reported during the previous month.

Before the July 4 weekend, Abbott imposed a statewide mask mandate and required bars to close in an attempt to stave off additional outbreaks.

“Hopefully people will maintain the behaviors that they have been doing, then I don’t expect to see a big surge,” Nandy said.