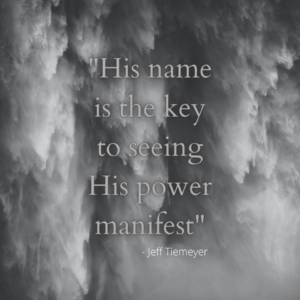 Drawing on His Power

Mark 16:17-18
17 “And these signs will accompany those who believe: in my name they will cast out demons; they will speak in new tongues; 18 they will pick up serpents with their hands; and if they drink any deadly poison, it will not hurt them; they will lay their hands on the sick, and they will recover.”

The Name of Jesus is the key to releasing the power God. Many people know this and invoke His name quite often and Jesus gives instruction throughout the Gospels to call on, ask, pray, and command in His name. But have you ever asked yourself why?

When someone is called on by name it honors them. It’s tells them that they are worth remembering and valued. Just like people feel valued and noticed when you call them by their names, He feels valuable and noticed when you call Him by His. You have to remember that God made you in His image and not just in the sense that you look like Him. You were made in His image spiritually, physically and emotionally. Think of how you feel when someone picks you out of a crowd and calls your name. You feel important, you feel like a somebody, not just an anybody. You feel honored. In the same way that you feel affirmed and recognized when you’re called on, He does as well.

Honoring Jesus by invoking His name when you pray or when you’re operating on His behalf releases His authority to enable you to access His power. It’s not that your simply using it as a magic spell or formula, you’re actually honoring the One you’re representing. Like the examples in today’s scripture text, His name is the key to seeing His power manifest. He is worthy of honor and there’s no greater way to honor Him than by touching those He’s wanting to reach with the power that comes from calling on His name. – Love and Blessings, Pastor Jeff