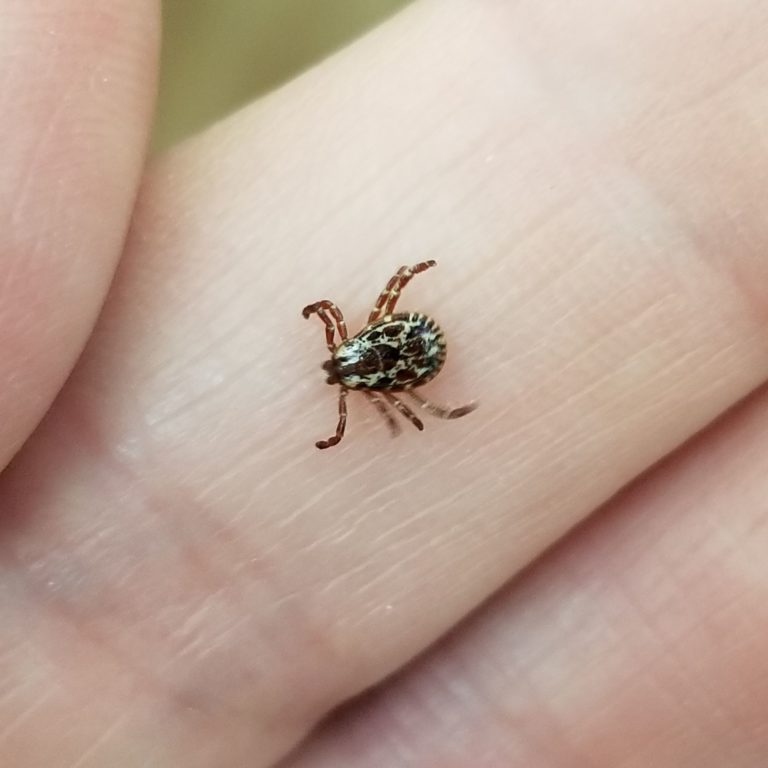 The American dog tick is one of the most common species found in Texas. (AgriLife photo by Wizzie Brown)

“Ticks are blood feeders in all life stages and can transmit pathogens that can lead to disease transmission,” said Sonja Swiger, Ph.D., AgriLife Extension entomologist, Stephenville.

“While we do see tick-borne disease here in Texas, our rates are much lower than many other states,” she said. “However, people need to be aware and vigilant. That is the only way to stop them.”

Where ticks are found

Swiger said since ticks can’t fly, the only way to be exposed to them is by entering their space or by catching them from an animal that has picked them up.

Unfortunately, ticks can be found pretty much anywhere.

“Aside from if you’re in a concrete jungle, there can be ticks,” Swiger said. “They can be in overgrown brush, a field, forest, park, tall grasses and anywhere there is wildlife.”

Given that many people have been inside more than normal due to COVID-19 and social distancing, Swiger said we do not yet know what that will mean, if anything, when it comes to ticks. Most ticks only live outdoors unless they hitch a ride into a home on a human or animal host.

“Since people haven’t been outdoors as much, that may mean some areas haven’t been mowed in a while or brush hasn’t been cleared. We’ve also seen wildlife coming into some urban areas more during these periods while people have been staying indoors. Will that increase exposure? We just don’t know yet, so people need to take precautions.”

Ticks are something people need to be aware of year-round, although as the weather warms their populations swell, typically peaking in the summer and then declining in the fall. Swiger said we are at the start of their “plentiful season.”

As Lyme Disease Awareness Month ends and many people plan to be outdoors for the Memorial Day weekend, now is a good time to review how to protect yourself and your family from these arthropods.

Lyme disease is the most common tick-borne disease, with an average of 30,000 cases a year reported to the Centers for Disease Control and Prevention. Lyme disease can also affect pets. There are numerous other diseases such as Rocky Mountain spotted fever and tularemia that ticks can transmit to people. Ticks are also responsible for often-deadly diseases in livestock such as cattle fever.

There are 11 common species of ticks found in Texas. The black-legged tick, brown dog tick, Lone Star tick, Gulf Coast tick and American dog tick are the species the average person is most likely to encounter. The TAMU TickApp for Texas and the Southern Region is a helpful tick identification and resource tool.

Ticks typically like to latch on to people’s head, hair, chest, armpit, groin, waist and back of the knees, so be extra vigilant when checking these areas. Headwear and light-colored clothing that protects as much skin as possible is also a good idea if you’ll be outdoors where ticks are present. Pants should be tucked into boots to minimize the odds of bringing an unwanted bloodsucker home.

“Check yourself after being outdoors,” said Swiger. “Also check your pets if they have been outdoors.”

Swiger said people who let their pets sleep in their bed with them need to be extra vigilant.

Around your home, keep lawns mowed, brush trimmed and weeds whacked. Be especially diligent about the areas around swing sets, sand boxes and children’s play areas.

Since rodents are part of the tick-borne disease cycle, eliminate places they like to live and hide. Try to avoid having brush piles and keep any building materials and gardening supplies off the ground.

If a tick is found, it can be removed with tweezers. Grasp the tick as close to the head as possible and pull straight out. If the head breaks off under the skin and cannot be removed, or if any pain, lesion or a rash develops, contact a doctor. If fever, headache, joint pain, muscle pain or swollen lymph nodes occur within 30 days of a tick bite, you should also inform your doctor.

“We don’t want this holiday weekend to be a perfect storm for ticks with the warmer weather, a lot of people outdoors and perhaps more overgrown brush than usual,” Swiger said. “I don’t want people to worry, I just want people to be aware.”

Identities Released of Two Young Children Killed in I-30 Accident