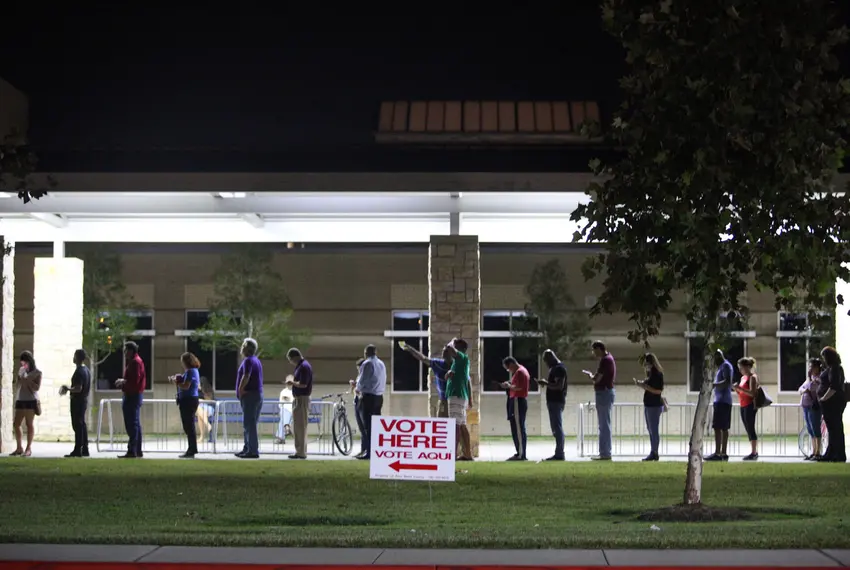 In its recommendations, the state said voters should consider wearing cloth face masks, bringing their own marking devices and using curbside voting if they have a cough, fever, shortness of breath or other symptoms associated with COVID-19. Photo credit: Michael Stravato for The Texas Tribune

With voting in the primary runoff election starting next month in the middle of the coronavirus pandemic, the Texas secretary of state on Tuesday issued “minimum recommended health protocols” for elections, including a suggestion that voters bring their own hand sanitizer to the polls and that they “may want to consider” voting curbside if they have symptoms of COVID-19.

In an eight-page document, Secretary of State Ruth Hughs laid out checklists for voters and election workers that range from self-screening for symptoms to increased sanitation of voting equipment — none of which are binding and many of which were already being considered by local election officials planning for the first statewide election during the coronavirus pandemic.

In its recommendations, the state said voters should consider wearing cloth face masks, bringing their own marking devices — like pencils with erasers or styluses — and using curbside voting if they have a cough, fever, shortness of breath or other symptoms associated with COVID-19, the disease caused by the new coronavirus. Voters in Texas have long had the option of having a ballot brought to them outside their polling place if “a voter is physically unable to enter the polling place without personal assistance or likelihood of injuring the voter’s health.”

The state instructed local election officials to place markings on the floor to facilitate social distancing and to keep at least 6 feet between voting stations. Election officials should also consider having all employees wear masks, the secretary of state said.

The recommendations are meant to serve as a baseline, and county officials can adopt additional protocols. Early voting for the July primary runoff starts June 29.

For weeks, local election officials across the state have been parsing through ideas on how to safely host voters. They’ve been rethinking contact during a process that requires close proximity to check voters in and the repeated use of shared voting machines. They’ve also been stocking up on — or scrambling to secure — new additions to their long lists of election equipment, including sanitation supplies, protective gear and plastic shields like those now common at grocery store registers.

The state’s guidance comes as Texas officials hold steady against expanding voting by mail during the pandemic. State Democrats, civic organizations and individual voters have asked state and federal courts to clarify who is eligible to receive an absentee ballot they can fill out at home and mail in, arguing voters shouldn’t have to risk their health to vote in the upcoming elections. More than 1,500 people have died from the virus in Texas, and nearly 56,000 have tested positive for the coronavirus.

Two judges initially ruled that a lack of immunity to the virus qualifies a voter for a mail ballot under the state’s narrow restrictions, which, in part, allow for absentee ballots if a person has a disability. But the Texas attorney general appealed those decisions, and they were blocked by the U.S. 5th Circuit Court of Appeals and the Texas Supreme Court. State election code defines disability as a “sickness or physical condition” that prevents a voter from appearing in person without the risk of “injuring the voter’s health.”

In the case before the Texas Supreme Court, front-line medical professionals argued that the nature of voting in person — including standing in line, interacting with others in close proximity and “communal touching” of voting equipment — would facilitate a “heightened danger” for transmission of the coronavirus.

The doctors and nurses also warned that planned sanitation measures like wiping down surfaces at polling places wouldn’t be enough to protect voters from a virus that’s most commonly transmitted through respiratory droplets that can hang in the air for several minutes.

Hughs’ guidance does not touch on the pending legal questions and instead suggests that voters who are 65 or older “may consider” voting by mail given the higher risks they face.

Daily Devotional from The Way Bible Church for May 27th, 2020