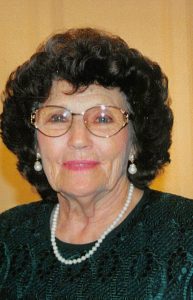 Rose Spencer Enix, age 96, passed away on Saturday, April 25, 2020, in Sulphur Springs, TX. She was born the daughter of Johnny and Annie Kitts Spencer in Hopkins County on June 6, 1923.

A life-long resident of Hopkins County, Rose graduated from Sulphur Springs High School in 1940. She married Edward Enix on June 14, 1941. He proceeded her in death in 1980. She was a homemaker and worked for Ike Clark then H.D. Lee Company for several years before she went into business with her sister Ola and opened the Cottage of Clothes dress shop. She was of the Baptist faith and a member of Rockdale Baptist Church for many years.

Her greatest joy in life was spending time with her family. She is survived by daughter, Sharolette Hyde; son-in-law Dwight Therwhanger; sister Mary Bonham; brother Charles Spencer and his wife Glenna; two grandchildren, Heath Hyde and his wife Kristi, and Dustanna Rabe; two great-grandchildren Reese Rabe and Hayden Hyde; and longtime companion Bill Johnson, as well as a host of very special cousins, nieces and nephews.

Rose was preceded in death by her parents, her husband, daughter Suzanne Therwhanger, sister Ola Worsham, and brother J.W. Spencer.