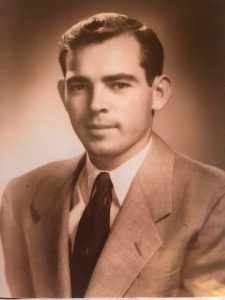 Herbert Eugene Elliott passed from this life on January 14th, 2020, at 1:50 pm in the afternoon and received his bountiful reward as a faithful servant for doing God’s work on earth.  Leaving family and loved ones behind who were sad to let him go, it was obvious he missed his dear wife of 64 years, Danna, who preceded him in death, and he was ready for a joyous reunion with her.

Herbert was born the fourth of eight children to Jesse B. “Jack” and Edna Byrd Elliott on June 28, 1929, in Sulphur Springs, Texas.  He spent his formative years in the little town of Winfield, Texas, where his father was the Agent for the Cotton Belt Railroad.

Growing up around the railroad instilled a lifelong love of trains and the railroading business.  He was always glad to be held up at a crossing by a freight train!

Like his two older brothers who served during World War II, Herbert was drafted for service in the Army during the Korean War.  With both infantry and artillery training, he was assigned to a gun crew firing a 105mm Howitzer during a six-month combat tour in Korea.

After the completion of his Army service, he enrolled at what was then known as East Texas State Teachers College in Commerce, Texas (now Texas A&M Commerce). There he met the love of his life, Danna Elaine Brashier, and they were soon married.

Herbert enjoyed many things in life:  all the activities of his kids, spending time with his grandkids, a love of gardening passed on to him from his father, a good joke, a good story, a good meal, a funny cartoon, composing and receiving funny letters, and the antics of the many dogs and cats in his life. He was also an elder at the Lackland Terrace church of Christ in San Antonio for many years.

A memorial service will be held at the League Street Church of Christ in February, and burial will be at the Lyons Cemetery in Sunnyvale, Texas this spring.

Daily Devotional from The Way Bible Church for January 27th, 2020