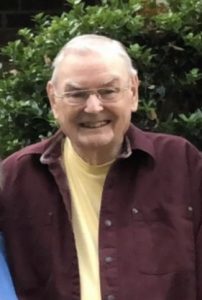 Paul was born in Tulsa, Oklahoma on November 27, 1934.He graduated from Will Rogers High School in 1952 and attended Oklahoma A&M College where he received a Bachelor’s degree in Personal Management. Paul served his country as he worked in public service for the U.S. Government while he and Lou lived in Oklahoma, Virginia and Texas. He retired on Lake Fork in Emory, Texas.

He is survived by his son Doug Leslie and daughter in law Charlotte Leslie of Garland, TX,brother Robert Leslie and sister in law Tomi Leslie of Oceanside, CA, brother in law Autry Hill and sister in law Geraldine Hill of Stillwater, OK, grandchildren Chris Leslie and his wife Sarah Leslie of Lometa, TX,Katie Leslie of Ogden, UT and Adam Leslie of Garland TX. Paulis also survived bythree great granddaughters, AngieLeslie, Lucy Leslie, and Frankie Leslie.He was preceded in death by his wife of 65 years Louise (Lou) Leslie where they lived for the past 28 years in Emory, TX,and his parents Wayne and Dorothy Leslie.

In lieu of flowers please contribute in Paul’s memory to the Parkinson’s Foundation or your favorite charity.

Memorial Service will be held at Memorial Park Cemetery, January 17, 2020 at 2:00pm in the Chapel at 5111 South Memorial Drive, Tulsa, Oklahoma 74145.Interment immediately following the service.