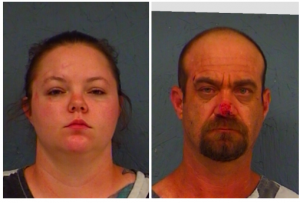 A married Como couple was arrested Monday night after a confrontation in which the wife bit off the tip of her husband’s nose.

A Hopkins County Sheriff’s Office deputy was dispatched to a disturbance on FM 1567 E in which the male subject had his nose bitten off. Upon arrival the deputy observed 43 year old Kenneth Higdon of Como was missing the tip of his nose. He stated his wife, 25 year old Danielle Higdon of Como, had bitten his nose after a confrontation about her communications on Facebook with a male whom she had previously worked with.

Mrs. Higdon admitted to biting her husband’s nose because Mr. Higdon was biting her thumbs. The deputy observed her thumbs to have red marks on each as well as a long red scratch mark on her left arm. Mrs. Higdon stated Mr. Higdon had displayed a handgun during the initial argument. A 9mm pistol was recovered from the residence.

Kenneth Higdon was placed under arrest and charged with Assault Causing Bodily Injury to a Family Member and Unlawful Possession of a Firearm by Felon. He is held at Hopkins County Jail on $12,000 bond.

Danielle Higdon was placed under arrest and charged with Assault Causing Bodily Injury to a Family Member. She is held at Hopkins County Jail on $2,000 bond.