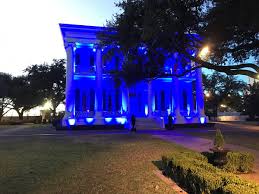 The Texas Governor’s Mansion was lit blue on the evening of Sunday, July 7th, in recognition of Fallen Law Enforcement Officer Day in the State of Texas. July 7th was designated Fallen Law Enforcement Officer Day with the signing of House Bill 3042 during the 85th Legislative Session, following the attack on peace officers in Dallas in 2016 which resulted in the death of five officers.

“We honor the memory of the brave men and women of law enforcement who died in the line of duty,” said Governor Abbott. “I ask that all Texans take a moment to remember these fallen heroes and to pray for their families and communities. This day is a solemn reminder that our law enforcement officers put their lives on the line every day so that we may be safe. The state of Texas is forever grateful to those officers who lost their lives and to all our men and women in blue.”

Sunday evening’s lighting comes on the three-year anniversary of the Dallas attack, and also serves as a symbol of remembrance for all Texas officers who have fallen in the line of duty.