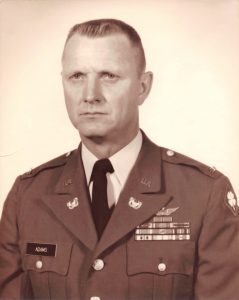 Arnold Lawrence Adams passed away March 17, 2019, in Sulphur Springs. He was born April 28,1927, in Bellows Falls, Vermont. His parents were Benjamin Moses Adams and Lillian Martha Wilcox. He was the youngest child of a family of 7 sons and daughters (Frank, Bernard, Wally, Evelyn, Madeline, and Virginia) all of whom have preceded him in death as well as his parents.

Arnold entered the US Army in July 1945 and served continuously for over 31 years. His first overseas assignment took him to the Panama Canal Zone where he met and married his wife Rita. Their two daughters, Jean Marie and Karen Gayle were both born in the Canal Zone. Two sons were also born into the family. Keith Douglas was born at Ft. McPherson, Atlanta, Georgia and Mark Andrew was born at the Aberdeen Proving Grounds in Aberdeen, Maryland, and preceded his father in death by two weeks.

While living in Georgia, Arnold joined the Forest Park Masonic Lodge. He was honored with a 50-year certificate presented by the Sulphur Springs Masonic Lodge.

From Aberdeen, Maryland, to Tabriz, Iran, the family was separated for another year.

Arnold was accepted into the US Army Helicopter School in 1957 which started at Ft. Wolters, Texas, and ended at Ft. Rucker, Alabama. He graduated in 1958 and was assigned to Ft. Bragg, North Carolina. Arnold’s next assignment was for Germany. Because of travel restrictions, families were not allowed to accompany their husbands at that time, so Rita and children resided in Sulphur Springs for one year. On arriving in Germany, the family lived in Mainz and then Schwabach, which is just outside of Nuremberg.

Lane in Sulphur Springs on Saturday, March 30 between 1 and 4.