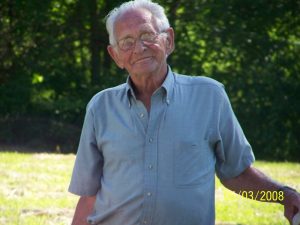 Funeral service for G. Kenneth “Curly” Allen, age 88, of Sulphur Springs will be held at 10:00 AM on Tuesday February 26, 2019 at Murray Orwosky Funeral Home with Bro. Johnny Wheat officiating.  Interment will follow at Seymore Cemetery with Butch Adams, Cheve Adams, Zachary Adams, Brandon Brock, Brennan Brock and Dan Mitchell serving as pallbearers.  Visitation will be from 6:00 to 8:00 P.M. on Monday February 25, 2019 at Murray-Orwosky Funeral Chapel.  Mr. Allen passed away on Saturday, February 23, 2019 at Carriage House Manor in Sulphur Springs.

Curly was born on March 2, 1930 in Brinker, TX to George and Mary Allen.  He married Joyce Ann Pounds in Sulphur Springs on June 19, 1954.  She preceded him in death in 2008.  Curly served in the US Army, was a Mechanic by trade and of the Baptist Faith.

Curly was preceded in death by his parents, wife, and sister, Pearl.