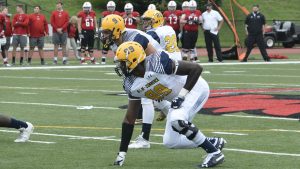 The No. 1 Texas A&M University-Commerce football team hits the road for a vital road Lone Star Conference test against the triple-option offense of Eastern New Mexico University. The Lions have been excellent on the road in the last six seasons and have a chance to create the longest winning streak by either team in this series.

LIONS LOOK TO CONTINUE ROAD SUCCESS
• With the 27-17 win in the road battle at William Jewell, the Lions extended the nation’s longest active winning streak to 12 games.
• The Lions have now won six consecutive true road games, including three road games in the 2017 Division II playoffs.
• In the six seasons under head coach Colby Carthel, the Lions are 19-2 in true road games in the regular season against Division II opponents.
• This is the first of two consecutive road Lone Star Conference games for the Lions, which are sandwiched around two non-conference home games.
• After the mix-and-match of conference and non-conference games, the Lions close the regular season with six consecutive LSC games.

ALL-TIME AGAINST THE GREYHOUNDS
•  This is the 32nd meeting between the two schools.
• The Lions took a 16-15 lead in the all-time series with last season’s win in Commerce.
• The Lions have won the last four meetings, which is their longest-ever winning streak against the Greyhounds.
• A&M-Commerce has scored at least 35 points in each of the last five contests vs. ENMU.
• The Greyhounds have won 11 of the 15 games played in Portales/Blackwater Draw.
• The Lions have won the last two games at ENMU, which is their only road winning streak in the series.
• A fifth consecutive win by the Lions would be the longest winning streak by either team in the series.

CARTHEL PICKS UP WIN NUMBER 50
• Head coach Colby Carthel now ranks fifth in A&M-Commerce history in coaching wins with 50 wins.
• He is now only 12 wins behind Lion and LSC legend J.V. Sikes, who sits in fourth place with 63 wins.

SENIORS ON PACE TO SET SCHOOL RECORD
• The 2017 senior class established the school record for wins in a four-year period with the victory in the National Championship Game with 42 games won in a four year span.
• The 2018 seniors now rank third in school history at 35-7 with a guarantee of nine more games in the season. The 2013-16 seniors also won 35 games, but had more losses than this year’s group.

MARTINEZ CONTINUES TO CLIMB SCORING CHARTS
• Kicker Kristov Martinez scored nine points at William Jewell, going 2-for-2 on field goal attempts and a perfect 3-for-3 on PATs.
• The graduate student from Edinburg is now 3-for-4 on field goal attempts and 7-for-7 on PAT attempts in 2018,
• He is now 57-of-75 on field goal attempts in his career, which is tied for 10th in Division II history. The Division II career record is 82 made field goals.
• West Texas A&M’s Sergio Castillo has the LSC record with 62 field goals.
• Martinez is the Division II active career leader in made field goals, and ranks fourth in all NCAA divisions behind LSU’s Cole Tracy  (73), Wisconsin’s Rafael Gaglianone (63) and Toledo’s Jameson Vest (58).
• LSU’s Tracy is actually a Division II transfer from Assumption (Mass.), where he won the Fred Mitchell Award in 2017.
• Martinez is on the preseason watch list for the Mitchell Award.
• For his career, Martinez has made 183-of-190 PAT attempts and is the Division II active career leader. Oklahoma’s Austin Seibert is the all divisions active career leader with 238 made PATs. Martinez is fourth in all divisions behind Seibert, Ohio State’s Sean Nuernberger (195), and North Dakota State’s Cam Pederson (187).
• In terms of overall scoring, Martinez  (354 points) is chasing Castillo (437 points), and former Harlon Hill winner at Texas A&I Johnny Bailey (426 points) for the all-time LSC scoring record.
• Martinez was named second team all-Super Region Four by the Division II Conference Commissioner’s Association and Don Hansen’s Football Gazette.
• He has been named a second team preseason All-American by Lindy’s.
• Martinez was also named LSC All-Academic and A&M-Commerce’s male LSC Scholar-Athlete for 2017-18.

WHEELER TOPS COMPLETION LIST
• Lion quarterback Preston Wheeler was ultra-efficient in his second career start, completing 25-of-31 passes for 181 yards, a touchdown, and two interceptions.
• That works out to an 80.6 percent completion ratio.
• That percentage is the second-highest in a Division II game this season, only behind Tiffin’s Nick Watson, who completed 24-of-29 passes for the Dragons against Northwood in the opening week of the season. That is an 82.8 percent completion ratio.
• Only 10 quarterbacks have completed 75 percent of their passes or better in a game this season.

“BIG MIKE” BEHIND THE LINE
• Michael Onuoha (pronounced uh-no-ha) has been a menace in the backfield in the opening two games.
• The senior from Edmond, Okla., ranks third nationally in sacks per game, averaging 2.25 sacks per contest. He has 4.5 sacks for losses of 25 yards through two games.
• He is tied for fourth nationally in tackles for loss, with 6.5 tackles for losses of 31 yards.
• Prior to the season, Onuoha was named an honorable mention All-American and second team all-region pick by Don Hansen’s Football Gazette. He was also a first team all-Lone Star Conference pick.
• “Big Mike” ranked seventh in the LSC with 12 tackles for loss and recorded 56 tackles in the 2017 season.

HARRIS AWARD NOMINEE IS TOP TACKLER
• The Lions’ leading tackler in senior Brucks Saathoff returns to lead the A&M-Commerce defense.
• The San Antonio native has 20 tackles through two games to lead the Lions for the third straight season.
• He was credited with 12 tackles in the win at William Jewell.
• He was the overall leader in tackles for the Lions in the opener with eight stops against A&M-Kingsville.
• In 2017, Saathoff was the Lion leader with 101 tackles, averaging 6.7 stops per game.
• For his career, Saathoff has 229 tackles, which is the leading mark for the Lions.

SUCCESS ON FIELD AND IN CLASSROOM
• One of the Lions’ top defensive performers was also one of the nation’s top academic performers in 2017.
• Senior Garrett Blubaugh is the second-leading career tackler on the squad.
• The Keller product has made 10 tackles through two games and his 153 career stops make him one of five players on the roster with 100 career tackles.
• Blubaugh was the football winner of the 2017 NCAA Elite 90 Award, which recognizes the top grade point average at the national finals site.
• The biological sciences major was also a Lone Star Conference All-Academic selection.

COOPER CRACKS CENTURY MARK FOR THE FIRST TIME
• Sophomore wide receiver Chance Cooper went over 100 yards receiving in a single game for the first time in his career at William Jewell.
• The Leander Rouse product had eight receptions for 103 yards to top the Lion receiving charts in the game.
• He had a long reception of 43 yards, which set up a late first half score.
• He has 11 catches for 138 yards through two games. His average of 69 receiving yards per game currently ranks sixth in the Lone Star Conference.
• Cooper is one of three Lion receivers in the top 10 in the LSC in terms of average yardage.
• Marquis Wimberly ranks fifth at 70.0 yards per game, and narrowly missed his own century game with 99 yards against A&M-Kingsville.
• Matt Childers ranks ninth at 60.5 yards per game.