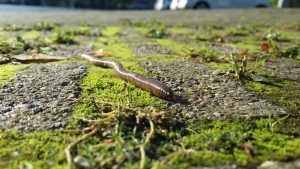 Do you remember the old rhyme? “Nobody likes me, everybody hates me, guess I’ll go into the garden to eat worms. Long thin slimy ones, short fat juicy ones, itsy bitsy, fuzzy wuzzy worms”. What a bad rap earthworms get, yet they are a vital resource in enriching our soil whether it be in your yard, vegetable garden, house plants or the cornfield.

Charles Darwin 100 years ago reportedly wrote that it may be doubted whether there are as many other animals which have played so important a part in the history of the world as have these lowly organized creatures.

The common earthworm sometimes called natures’ plow is well worth another look. The most common worm in this part of Texas is the Lumbricus terrestris or night crawler. They are natural composters. This is a worm most often seen after torrential rains and at night particularly when the ground is moist from dew or a rain. They can be large, with a darker colored head end and have a thickened band of discoloration close to the front of the body. The “tail” end of the worm tends to be flatter than the “head”. They provide improvement to soil fertility by tunneling deeply into the ground, sometimes several feet deep, pulling below the surface deposited organic matter such as leaf fall or manure either for food or to plug its burrow. Once in the burrow, the worm will shred the leaf and partially digest it and mingle it with the earth. Worms end result (castings) can contain 40 percent more humus than the top 9” of soils where the worm is living. In addition to the dead organic matter, the earthworm also ingests other minute soil particles. The excretions left behind after the worm has digested its intake are called castings.  Castings contains minerals and plant nutrients that are changed to chemicals that in turn enrich  the soil within a surrounding six inch radius. In conditions where humus is plentiful the weight of casts may be greater than 10 lbs. per year per worm! The earthworms’ physical activity of burrowing creates a multitude of channels through the soil and is of great value enabling processes of aeration and drainage.

Most worms are hermaphrodites (organisms that have both male and female reproductive organs at the same time). Reproduction in earthwormsresults in cocoons about the size of a match head or a small grain of rice. Color-wise they start out as a luminescent pearly white and through the maturing process of the soon to be baby worms will end up a reddish color. This process takes about 3 weeks and results in 1 to several baby worms being hatched. These cocoons can survive through the winter months ensuring the survival of earthworms. Some adults will hatch and die in the same year depending on conditions such as dryness, temperature or predators. Some earthworms  however, have been known to live 6-7 years.

Having talked about common earthworms in Texas and extolling their virtues, there are some bad guys out there too. One is the terrestrial hammerhead flatworm Bipalian kewense, recognizable by a half-moon shaped head – think hammerhead shark. This one is a known predator of worms. Not only that, but they are detrimental to the environment. They are typically light-colored with dorsal stripes. These should be destroyed. Chopping them into pieces causes them to multiply because they can regenerate from the pieces. Effective treatment methods include citrus oil, vinegar or salt.  Apply these products directly to this worm.

Another useful benefit of earthworms is vermiculture. Vermiculture is the practice of feeding organic waste to earthworms commonly known as the red wiggler or the tiger worm. The night crawler, which burrows deeper than the vermiculture process requires, is not recommended for this practice. Vermiculture can be safely done in your house or other specially designated areas in special containers.  Previously discarded kitchen waste is converted to material that can use on your houseplants and in your garden. You and your children gain a better understanding of one of the lesser-advertised methods of recycling and start thinking about the interdependencies so important for us and the planet we live on.

There is economic value in vermiculture. Earthworms are sold all over the world not only for vermiculture in large quantities but can also be used as food for human consumption. Noke is a word used by the Maori of New Zealand and refers to earthworms that are considered delicacies for their chiefs. These sales result in an industry worth millions of dollars for both Canada and the US.

A very interesting fact emerged from a research article showing that there is a decay of low-density polyethylene by bacteria extracted from earthworms guts Ref: Science of the Total Environment 624:753-757 Dec. 2017. Could this solve the ever-increasing problems of the hazardous amounts of plastics accumulating the world over?

Worms Eat My Garbage 2017 by Mary Applehof and Joanne Olszewki