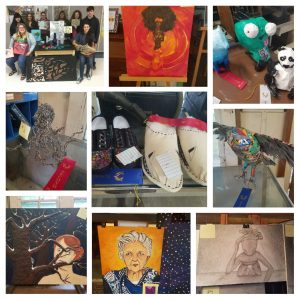 The Sulphur Springs High School Fine Arts Department would like to invite you to attend the SSHS Fine Arts Showcase on Tuesday, May 15th at 7 pm in the SSHS Auditorium.

The SSHS program will offer a look at all of the classes within the Fine Arts program at SSHS.  It will include music, theatre, art and dance.  Starting off the program will be the SSHS Wildcat Band. They will be playing 3 numbers, including a sneak peek at the music from next year’s marching show.  They are under the direction of Rothman Tafel, Jeff Garza and Steve Proctor.

As the Jazz Band and Strings set up behind the curtain, theatre students will present a scene from their Senior Student Directed play, Almost Maine.  They are students of Lesha Woodard.

The Jazz Band will follow with 3 numbers and then the SSHS Strings will present a number from their UIL Contest music and some other tunes.  Strings is under the direction of Theresa Anderson.

As the Choir sets up behind the curtain, the theatre students will present another scene from Almost Maine.  The full play will be presented later that week on Thursday and Friday.

The SSHS Choirs will each perform two numbers.  The groups are the Singers/Bella Voce, Chorale, and Rhapsody.  They are under the direction of Beth Cole.

As the stage is cleared for Drill Team, the SSHS Choir Ensemble will perform the selection it will be taking to UIL State Solo and Ensemble Contest at the end of the month.

Our Finale will be the 56th Line of the SSHS Blue Blazes.  They will dance to If You Could See Me Now. They are under the direction of Christie McCullough.

The art students and theatre tech students will have a wonderful display set up in the lobby to show their work.  We encourage you to come early so you have time to look around.  They are under the direction of Philip Dick, Amber Warren and Desi Pharis. The auditorium doors will open at 6:30.

Admission is free. We are asking that students and parents plan to come and stay for the entire evening to show support for each other and get to see and hear some great performances.