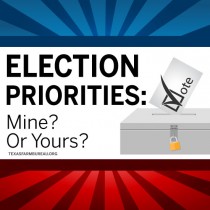 It is the political season and all kinds of organizations are making candidate endorsements. As a participant in that process for Texas Farm Bureau, I hear from folks who are less than happy with the choices.

The Farm Bureau Political Action Committee—AGFUND—makes those selections on voting records and positions on agricultural issues. Candidate Evaluation Committees composed of local farmers and ranchers are key to the process.

Some selections may not align with a particular issue other folks care about. Some get riled up enough to suggest that Farm Bureau isn’t representing their issue and doesn’t deserve their support.

Rural America felt ignored enough to become a major and relevant factor in the 2016 presidential race.

The political process always works best when about issues. Disagreement is both expected and useful.

Hearts of Life Animal Rescue Dog of the Week-Meet Rhea!