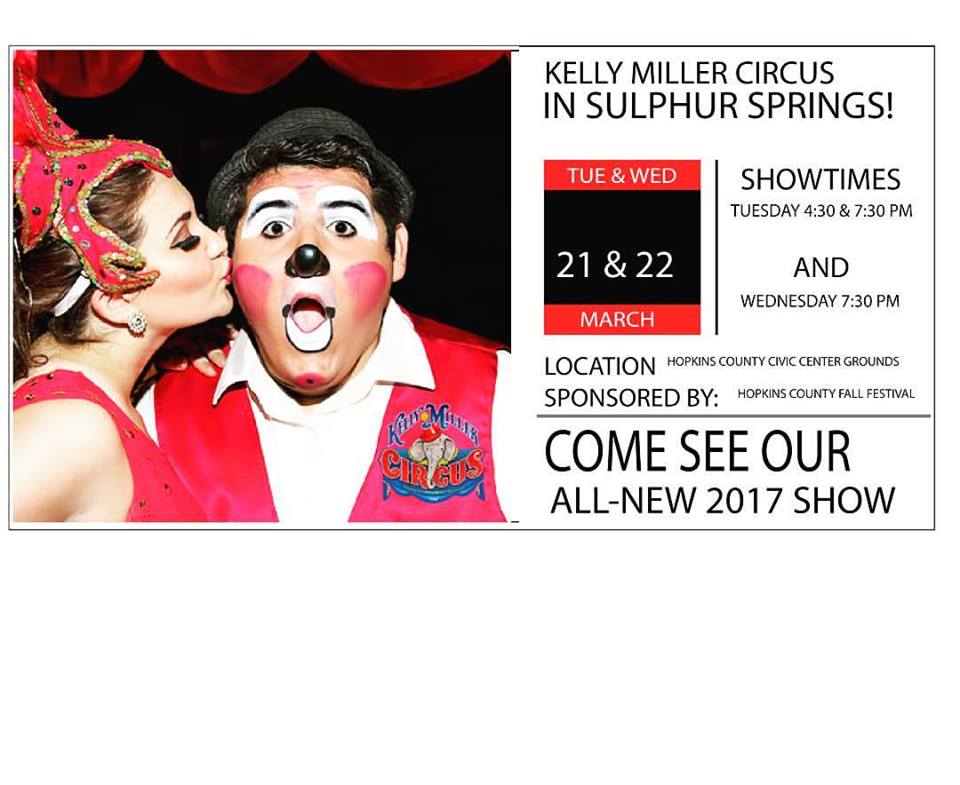 Hopkins County Fall Festival present the Killy Miller Circus on March 21st and 22nd at the Hopkins County Civic Center. There will be 3 showtimes: Tuesday 4:30 & 7:30 and Wednesday 7:30.

Started in 1938 by Obert Miller and his sons, Kelly and Dory, the Al G. Kelly Miller Brothers Circus, now known simply as Kelly Miller, has entertained millions of American and Canadian citizens while establishing itself in the fabric and history of the American Tented Circus.
The Miller Family devoted their lives to their circus and through talent and hard work built it into America’s 2nd largest big top show. They introduced hundreds of new circus artists to the American public and countless innovations in circus operation. From the very beginning they insisted that their circus maintain high standards and be welcomed back to communities year after year.From 1984 through 2006, David Rawls, president and third generation circus performer and manager directed the Kelly Miller Circus.  In 2007, another exciting chapter in its history began when the show was purchased by John Ringling North II.  Mr. North’s great uncles were the famous Ringling Brothers, his grandmother, their only sister. Born into this most famous of circus families, John grew up on the “Greatest Show on Earth”, learning circus operation from his father Henry Ringling North, and Uncle John Ringling North. He is dedicated to the circus, always seeking ways to improve it. Mr. North can be seen at most performances watching the show with a critical eye.

The circus travels on a fleet of 36 vehicles and requires an area of 350’ by 350’ to set up on. The colorful circus big top has a seating capacity of 1100 and is made of waterproof vinyl. The tent is 120’ by 120’ and is 40’ high and is supported by more than a quarter of a mile of heavy gauge aluminum tubing as well as several miles of rope, steel cable and chain.

The Kelly Miller Circus has gathered a galaxy of stars from many nations, as well as an exotic display of animals, enhanced them with beautiful theatrical lighting and lively circus music for a performance to warm the hearts of young and old alike.

From the early morning hours, when the big top is raised into the air, to the very moment when the king pole races to the ground at the end of the day, you the public are invited to come and be a part of the magic of “Circus Day” as it has been experienced for over 200 years!