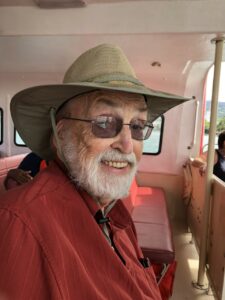 Dwayne Grimes was born October 3, 1936, in Longview, TX to Archie and Laura Jackson Grimes and died September 3, 2022, in Sulphur Springs, TX. He spent the majority of his childhood in Shreveport, LA and Lubbock, TX, graduating from Lubbock High School in 1954. He was a lifelong fan of Texas Tech University which he attended several years before graduating from West Texas University. He served in the U. S. Army.

Dwayne had an early career in radio/TV broadcasting while in west Texas Prior to entering the ministry in 1963. He served as church pastor in Stinnett and Floydada. Dwayne was a talented multi medium artist and was owner of an art gallery in Plainview where he also gave art lessons. He moved to Sulphur Springs in 1976 and continued his broadcasting career for 38 years at KSST Radio/TV. Dwayne never ceased ministering to others, and he shared his love of Jesus Christ as a member of the First Baptist Church of Sulphur Springs often teaching Sunday school classes there.

Dwayne married Kelly Bradford on February 14, 1981. He is survived by his wife Kelly; three daughters, Dianne Dunlap (& Billy Nichols) of Lubbock, Renee Grimes Stanley & husband Jay of Lakewood Village, Kerry Lyn Borne & husband Chris of Ft. Worth, seven grandchildren, three great-grandchildren, and his God-given families, Jared and April Barnett family of Sulphur Springs and Jeremy & Erica Gilliam family of Lufkin along with his God given brother and sister, Gary and Pat Odom. He was preceded in death by his parents and son, Richard Grimes.

A Celebration of Life will be held at a future date. The family requests those who wish to express sympathy or remembrance consider making a donation to the First Baptist Church of Sulphur Springs or to their favorite charity in Dwayne’s name.