Home » PEEKING THROUGH THE CORNFIELD: GHOSTS OF BASEBALL’S PAST 1/28 with Jordan Miesse
FeaturedLifestyleLocal SportsSports

PEEKING THROUGH THE CORNFIELD: GHOSTS OF BASEBALL’S PAST 1/28 with Jordan Miesse 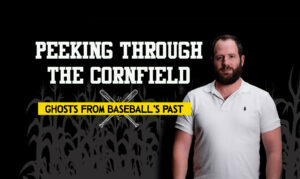 Francis Joseph “Lefty” O’Doul’s professional baseball career began in 1918. That year the 21-year-old left-hander would make his pitching debut with his hometown San Francisco Seals of the Pacific Coast League. The next year, the Major Leagues would come calling.

O’Doul, Frank to his friends, was called up on April 29th, 1919 to pitch with the New York Yankees. He was a middling reliever with the team until the 1923 season when he split to pitch for the rival Boston Red Sox where he would see a lot more time on the mound that year.

His most infamous game with the Sox came on July 7, 1923, against Cleveland. O’Doul came in to relieve starter Curt Fullerton in the fourth inning. In his three innings of relief, Lefty gave up 16 runs to set a Major League record that still stands. It should be noted that only three of those runs were earned, as the Red Sox defense committed several costly errors.

O’Doul finished out the 1923 season but would never pitch again in the big leagues. His arm had just given out. His career line ended up being a 4.87 ERA in 77.2 IP, but it would not be the last time he played in the show.

Having now converted to the outfield, O’Doul spent the next four years playing back in the PCL, bouncing around teams like the Hollywood Stars, the Salt Lake City Bees, and, once again, with the Seals in San Francisco. He became a prodigious hitter, batting .398 in 1924 and becoming only the second of four players in PCL history to have a 30-30 season (30 steals, 30 home runs).

By the 1928 season Lefty was called back up to the majors, this time with the New York Giants of the National League. He batted .318 as a platoon player that year and was traded to the Phillies in 1929. That season he would finish second in the MVP voting to Rogers Hornsby. O’Doul won the batting title, slashing .398/.465/.622, and led the league in hits, OBP, and total plate appearances.

Over the next five years, O’Doul would leave Philadelphia to play with the Brooklyn Robins (now the Dodgers) and then with the Giants once again and would ultimately retire with them at the end of the 1934 season. He would finish his eleven-year MLB career with a .349 batting average, the highest of any player eligible for the Hall of Fame that has not been enshrined. He won two batting titles, one World Series, and was a one-time all-star.

His major league career may have been over, but Lefty O’Doul was far from finished with baseball. He went back to the PCL, but this time as manager of the Seals and there he would stay until 1951. They won the championship in 1935 and by 1937, Seals owner Charlie Graham had offered O’Doul a contract as manager of the team “for life”. He won several pennants with the team and was Sporting Life’s Minor League Manager of the Year in 1945.

After his time with the Seals, O’Doul would manage four other PCL teams and currently ranks ninth amongst minor league managers in victories with 2,094. On September 16, 1956, while he was managing the Vancouver Mounties, the story goes that the 59-year-old manager inserted himself into the game to bat for his team. Upon seeing this, the manager of the opposing team ordered his outfielders to move in and, in a moment touched by the baseball gods, O’Doul socked one over the center fielder’s head for a triple. That would be his final professional at bat.

His ability to teach hitting is legendary, and some of his PCL pupils included Ted Williams and Joe DiMaggio. He would also serve as a part-time hitting instructor for the Giants from 1958 – 1961, where he would instruct the likes of Willie Mays and Willie McCovey.

Also in 1958, O’Doul opened his hofbrau restaurant, Lefty O’Doul’s Restaurant and Cocktail Lounge, on Geary Street in San Francisco. There it remained a popular staple until 2017 when the owners would move to a new location at Fisherman’s Wharf. His signature original recipe Bloody Mary mix can still be found in stores nationwide.

Amongst all the other accolades and accomplishments, one thing stands out: O’Doul is enshrined in the Japanese Baseball Hall of Fame even though he never played in the Nippon Professional Baseball League.  He was a pivotal figure in establishing professional baseball in Japan. He served as baseball’s goodwill ambassador to Japan both before and after World War II, he was even able to name the Tokyo Giants after the team in New York.

Lefty O’Doul’s contributions to baseball are myriad. He is a legend in San Francisco, where he has a bridge named after him that spans McCovey Cove. He passed away on December 7, 1969 at the age of 72 in his home town.

Sourced from the Los Angeles Times, “At Age 15, Nuxhall Grew Up in a Hurry : The Youngest-Ever Pitcher in Majors Broke in 50 Years Ago Against Musial.” Joe Kay, June 5, 1994 (Print).