Peeking through the cornfield: Ghosts from Baseball’s Past- ‘Big’ Ed Delahanty 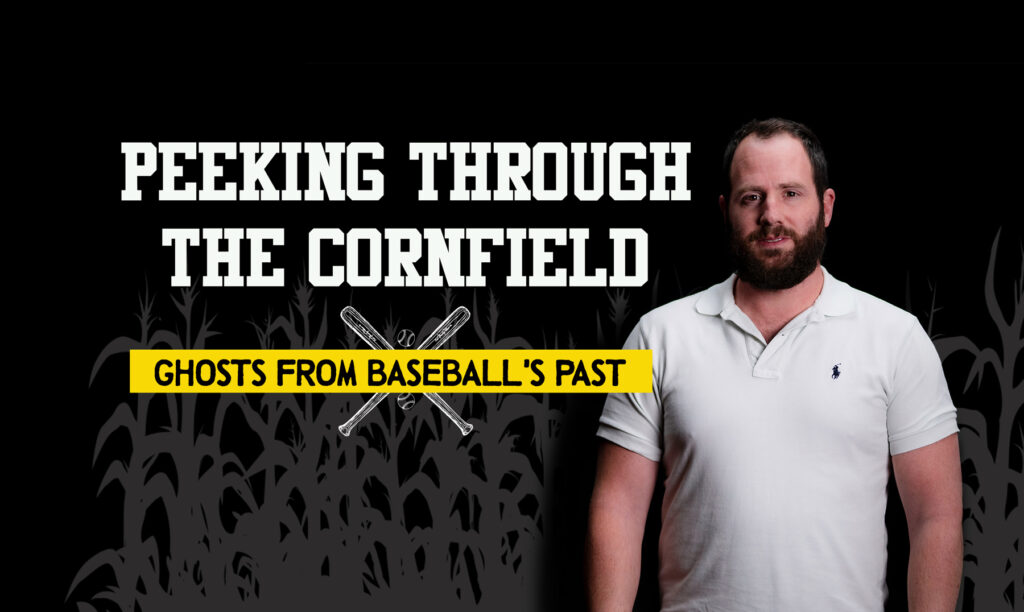 James and Bridget Delahanty immigrated to America from Ireland in 1865. The hard-working couple settled in Cleveland, Ohio where James found work doing odd jobs and Bridget ran a boarding house out of the family home. It was here that they started their family. After losing their first-born son in infancy, on October 30, 1867 the couple gave birth to first of eight healthy children. They would name this child Edward James Delahanty. All six of the boys would grow up to play professional baseball; Ed, Frank, Jim, Joe and Tom all reached the majors and Willie Delahanty played minor league ball. Ed, “Big Ed” as he would come to be known, would prove to be the best ballplayer and one of the most prolific power hitters of his time.

Ed and his brothers spent most of their time playing sports around the neighborhood, particularly baseball. By the time he was 19, Ed had been recruited to play for the semi-pro team the Cleveland Shamrocks. He continued playing semi-pro ball and worked his way up to the minors where his .412 batting average in the Tri-State League caught the attention of the Philadelphia Phillies who purchased his contract for $2000.

Listed at 6’1” and 170 LBS, the right-handed utility infielder was a free swinger which led to him not finding much success during his first year in the National League. Delahanty slashed .228/.261/.293 in his rookie year with an OPS+ of 72 which is well below where he would have liked to be (a league average hitter’s OPS+ is 100).

Delahanty’s sophomore season with the Phillies proved more successful, he hit .293, but he still chose to jump ship and move to the Players League in 1890 to play with his hometown Cleveland Infants. When the Players League folded, he once again found a home in Philadelphia with the Phillies. His struggles continued in the NL until the 1892 campaign, for which he had rededicated himself to the game and worked out voraciously in the offseason.

Over the next decade, Delahanty was a dominant force in the league. During that span there are 27 instances of black ink on his Baseball-Reference page, meaning that he led the league in an offensive category that many times. Over that span he hit .400 three different times and led the league in slugging percentage four times. He had also developed into one of the game’s premier outfielders, with a cannon arm that helped him rack up 238 career assists playing mostly in left.

Of particular note was a game in which he played against the Chicago Colts on July 13, 1896 at the West Side Grounds in Chicago. In that game Big Ed went 5-5 with four home runs, making him only the second person to ever accomplish that feat. Only 16 people have done it since, the last being J.D. Martinez with the Red Sox in 2017. Interestingly, recent research into the game has shown that two of the four home

runs were of the inside-the-park variety which makes Delahanty the only man to have any of his four home runs in a game come in that fashion.

Despite all his personal success, and the abundant talent on the Phillies that included the great Nap Lajoie, the team failed to win a pennant during Delahanty’s tenure. Owner John Rogers also failed to provide his star players with appropriate compensation. At the turn of the century, Big Ed found himself, one of the best hitters in the world, only making slightly more than he had as a rookie a decade earlier. Saddled with debt from gambling and alcohol addiction, Delahanty led a group of nine players from the Phillies to quit the team and join the fledgling American League.

In 1901, Delahanty’s first season with the Washington Senators of the AL, he turned in another star performance, leading the league in batting average, on base percentage, and slugging (.376/.453/.590). Big Ed, hoping to pay off his mounting debt, attempted to leverage his success and leave the Senators for the higher paying New York Giants.

A deal was on the table, but the contract with the Giants was declared void due to interleague financial agreements and Delahanty was sent back to Washington, owing more money now than ever before including the advance he had received from New York.

Delahanty reported to the Senators for the 1903 season, reportedly fairly out of shape and continually drunk. There he managed to post a .333 average in 42 games with the club. Despite his hitting prowess, a pattern of increasingly erratic behavior developed off the field, including the drunken Delahanty threatening suicide, and, on June 17, he took out a life insurance policy on himself. At a stop in Detroit, Big Ed abandoned his team, got blind drunk, and boarded a train bound for New York.

On the train, Delahanty acted recklessly. He broke emergency glass and smoked and drank in areas not designated for such activities. At some point, he passed out and woke up disoriented when the train made its scheduled stop in what is now Fort Erie, Ontario. In his confusion, Delahanty attempted to enter someone else’s berth and had to be subdued by three men as he became increasingly unruly. Some reports paint Delahanty as having threatened passengers with a razor. The conductor ordered Big Ed off the train, leaving him in Canada as they headed across the bridge into Buffalo, New York.

Big Ed Delahanty died that night. It was dark and the inebriated man found himself on the International Railway Bridge, some 25 feet above the Niagara River. Night watchman Sam Kingston found Big Ed standing still looking down into the river. The events that led to his death are not exactly clear. Kingston says that a scuffle erupted between the two men and he attempted to bring Delahanty back to the middle, safer part of the bridge, but the watchman fell down and Big Ed got away. It was too dark for Kingston to see, he said, but Delahanty wound up in the river one way or the other. His body was found seven days later approximately 20 miles downstream from where he had last been seen.

Edward James Delahanty was 35 years old when died. We may never really know what happened that night or how exactly he came to meet his demise. Was it suicide? Or something more sinister? It remains a mystery.

Big Ed Delahanty was a career .346 hitter, a 2 x home run champion, 3 x RBI leader, and a one time batting champion. He was elected to the National Baseball Hall of Fame by the Old Timers Committee in 1945.