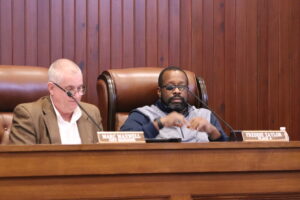 “I acknowledge no one in this room has a crystal ball,” Julian said. “That being said, inflation has risen from 1.4% in January 2021 to 6.2% in October. The November inflation report will not be available until December 10.”

“Is there anything this council should be concerned with relating to the city’s budget landscape, and should inflation continue to rise unabated?” Julian asked.

“We are keeping a close eye right now, as it’s pretty tight,” city finance director Lesa Smith stated. Smith stated the city has noticed increases in payments of water and sewer. Julian asked if council members would have to pass budget amendments to deal with rising costs, and Smith answered in the affirmative.

“On the water and sewer side, there may need to be fee increases that happen to counter that [inflation],” Smith noted.

No action was taken on the manager’s report, as none is required.

A previous version of this report did not include Julian’s full quote. It has been updated to reflect the full quote.

Darrow, Smith sworn in at city of Sulphur Springs