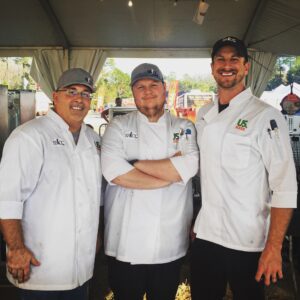 Chad’s Media partner and vice president Logan Vaughan is a cook by training, and a food sport competitor as a hobby. Yet it’s not just any type of food challenge he’s involved in– Vaughan is one of an elite global few who compete in the World Food Championships. For the past few years, Sulphur Springs’ Vaughan has been making a name for himself on the world stage. His 2021 return to the World Food Championships on Nov. 5 will mark, at the very least, a personal victory after tragedy struck at the 2019 event.

Vaughan always loved to be in the kitchen. He spent his teen days with his father, Mike Vaughan, at TaMolly’s Mexican Restaurant, before striking out on his own first cooking gig at Joe Bob’s 3. He spent a year underneath Chef Maribeth Krukow in the kitchen at Dallas Christian College. After all his career changes– ordained pastor, restauranteur, country club manager, and now media guru– his love for cooking has stayed with him.

The Sulphur Springs event lead Vaughan to receive an invitation to the World Food Championships Steak Invitational. In 2016 the group, now consisting of Steve Littlefield and Matt Mayfield, traveled to Orange Beach, Alabama to compete in what is billed as “the world’s largest outdoor cooking competition.” 1,500 chefs from around the globe compete for a chance at a $100,000 prize.

After spending hours in the outdoor ocean sun at The Wharf pier watching competitors from all over the world, the East Texas team tasted tantalizing victory. They placed fourth in the steak category, and were hungry for more. Placing within the top ten secured their spot for the next year at World Foods.

In 2017, Vaughan and Littlefield returned to Orange Beach, cooking their rendition of a steak kabob and their own signature steak dish. Although they had spent months in their test kitchen perfecting it, they only earned them eleventh place, missing the Top 10 by merely three tenths of a point.  The men were proud of their finish; however, they were one slot short of an automatic invite to the 2018 games.

In 2019, Vaughan and Littlefield got an email. Would they like to enter the World Food Championship, now relocated to Dallas, as a wildcard elite?

“Coming on the heels of my exodus from the country club life, this was another opportunity to not only showcase what I felt we could do at the competition level, but also showcase our sponsors and their amazing products”, Vaughan said. 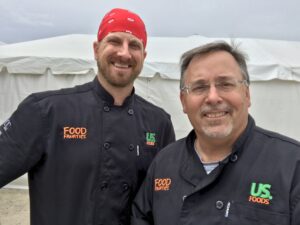 Having come a hair’s breadth from the grand prize two previous years, a first place at the World Food Championships was now Vaughan’s white whale.

However, the competition had changed slightly with its adoption of the Steak Cookoff Association’s rules to follow the SCA rules and scoring.  So, Vaughan and Littlefield had to hit the road to learn a new approach to cooking steaks… the SCA Way.

“We decided our best bet was to travel and do SCA cooking competitions,” he said. “We wanted to get our feet wet and learn what it would mean to place.”

So the men took their Weber grill down to Canton for a local steak cookoff hosted by the SCA. They placed in the top ten and experienced their first “steak walk”, the phrase used by SCA when cooks’ names are called for Top Ten placement and they walk up and receive a trophy.

While competing in Midlothian, they were granted what those in the steak world call a golden ticket– an invitation to cook in the SCA World Championship a few weeks before the World Food Championship Steak Invitational which was now going to be held in Dallas, Texas.

On Oct. 6, 2019, Littlefield and Vaughan attended the SCA World Championships at the Will Rogers Memorial Center with hundreds of other competitors from around the world.

“It was a whipping, just a brutal whipping,” he said. “I had my Kingsford charcoal and my Weber grill, and I thought I was going to beat everyone with good, old-fashioned Americana. But we left feeling defeated.”

Although Vaughan and Littlefield did not place within the top 100, that didn’t slow the team down. With only two weeks until the World Food Championships and Vaughan’s chance at redemption, “we knew we had to practice like we never had before,” he said. Not only did the team have to cook a SCA-style competition, they also had to turn in a full plated dish if they made it to the WFC Top Ten.

“I felt like we had a lot of momentum going for us, and even though we didn’t walk at the SCA World Championships, I was dead set on making the Top Ten at the WFC,” Vaughan said. “I believed our competitive edge was plating, sauces and accompaniment.”

Making a steak is one thing, but “Can we handle the craft and the artistry?” Vaughan questioned. “I was feeling very confident.”

On October 16, Vaughan and Littlefield arrived in Dallas at Reunion Lawn for their triumphant return to the World Food Championships.

“The SCA judges there were lots of those who had already tasted what we’d been doing at local competitions, so we were feeling great about the playing field,” Vaughan said.

However, perhaps out of an unquenched thirst to win, the team used the Dallas event to make subtle but important changes that would later cost them the competition.

Their first mistake that day was to switch their brand of charcoal.

“Everything with cooking is about timing,” he said. “You have to time it so it goes in at the optimum time, so it comes out at perfect heat, texture and temperature. It’s more numbers and math than people realize so that it comes out spectacular for me to walk it to the judges.”

Yet when Vaughan checked the grill’s temperature, steak in hand, he was astounded at what he found. Instead of being over 600 degrees, the reading was a measly 275 degrees.

“I’ve got to put a steak on here in no time,” Vaughan panicked. After investigating, the men found the coals had suffocated and died inside the new charcoal insert that they had decided to use for the first time. The new charcoal, instead of smoldering through, had turned to ash in the bottom of this funnel inside the grill, choking out the fire’s much-needed oxygen and preventing the grill grates from heating up.

“Steve was pulling coals out, and I was throwing oak chips on as fast as he could,” Vaughan said. “We were down in the fire blowing on the coals, just trying to get it going.” Vaughan even singed his facial hair in the desperate attempt to get the grill up to temperature.

“There was just enough time to cook the steak before our window closed,” Vaughan said.

Their next mistake was changing the type of string used to tie their ribeye.

String is often used to hold the steak intact during cooking. “You usually cut the strings once you take it off the grill, and it looks like a picturesque ribeye,” Vaughan clarified.

Vaughan special-ordered baker’s twine, which at 1 millimeter is half as thick as butcher’s twine. Vaughan didn’t want indentations from the string on his perfectly-cooked steak, and thought thinner twine would do the trick.

The steak was looking great, Vaughan said. With no time to rest, the team finished. The staff at the turn-in table even commented on the ribeye’s pleasing appearance.

“The difficulty with the thinner strings is: you can’t see them,” Vaughan lamented in retrospect.

Halfway back to celebrate with Littlefield at their station, the realization hit Vaughan: they left the strings on the steak. Immediate disqualification and heartbreaking defeat loomed for the men.

“It’s over. Like, it’s over,” Vaughan said. “I looked at Littlefield and all I could say was ‘I’m so sorry.’ The look in his eyes– defeat. Sadness. We worked three years. I just lost it.”

“You are the captain watching the waves coming in and you don’t have a lifeboat,” he said. “You are going down with the ship. It was completely brutal.” 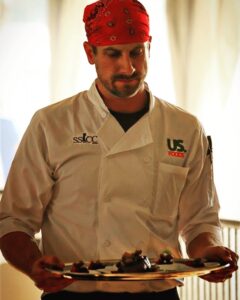 For the remainder of 2019, Vaughan disappeared from competitive cooking. Although he was plenty busy with his growing role in Chad’s Media, he considered a return to food sports in 2020. However, as with most of Hopkins County, the Covid-19 pandemic stopped all plans in their tracks.

“Competitors continued to reach out to me,” he said. “Although we compete against each other, it’s like a family.” One thing he said buoyed him was that most of his World Food competitors assured him that day that forgetting the string was a mistake they’d all made before– just not at the World level.

And just as with many, the pandemic was a mixed blessing. Vaughan spent time with family, including his newborn son. He was there to support friend and Chad’s Media founder Chad Kopal after his son Sam passed away. He supported his wife, a teacher at Barbara Bush Primary, as schools attempted to navigate the pandemic.

“It was just such a different year,” he said. “Food competitions just seemed so unimportant compared to everything else… It was a reset.”

As 2021 dawned with the pandemic in the rearview mirror, Vaughan and Littlefield dipped their toes into the competitive food waters again, and found their talent never left. They took first at Paris’s Steak Wars, and won grand champion of the professional division where they got their start: the Cattlemen’s Classic and Ribeye Roundup.

And then, they got the call that once meant so much to them– an invitation to be a wildcard elite at the World Food Championships. This time felt different, though.

“We’re feeling confident, but at the same time, we’re going for fun,” Vaughan said. “We’re not as heavily invested in the outcome. This time will be about the personal journey.”

After having spent two years with Kopal at Chad’s Media, Vaughan has gotten in touch with the side of himself that once got joy as a pastor.

“It’s more along the lines of bringing pride to our community,” Vaughan said. “Breaking bread with your neighbors is one of the most powerful and rewarding things you can do.”

And now, the whole Vaughan family tags along to competitions and catering events under the name Tableleaf.  Vaughan has been known to use the phrase “Gather More People,” and his family’s mantra of inclusivity is a welcome message in a time of division.  For the Vaughans, love starts in the kitchen.

“It’s like, I picked this recipe out for you. I worked all day. I know it’s cheesy, but sharing what you’ve made with someone else, there’s no greater feeling, and whether we are at home, or work, there’s always room at our table for others.”