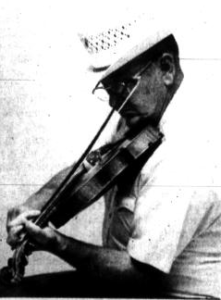 The Hopkins County Fall Festival has seen many changes over the years, and there are a few events that originated with the festival that are no longer celebrated.

The fall festival is an outgrowth of ‘old timers’ reunions or homecomings, which have been around since the first days of Hopkins County. Between 1851 and 1882, the first white settlers arrived in the area, according to local historian June Tuck.

As the community continued to grow, the settlers would gather together during the fall in the spirit of homecoming, according to Tuck. One meal hearty and filling enough to feed all of them was a large kettle of stew, and this is how fall and stew became inextricably linked.

Each community had its own homecoming festivities, and many of the early diversions the settlers practiced were the early traditions of the fall festival.

One thing that used to go hand-in-hand was autumn in Hopkins and fiddling, and our county has a proud tradition of Texas folk music.

Fiddle music has a strong tradition in the British Isles, notably Ireland, where many Hopkins County residents originally came from. After immigrating from across the pond in the 1820s and 1830s, they settled in port cities of the American south such as in South Carolina and Alabama, but looked for economic stability in Texas during the early 1840s, Tuck documented.

As was the case in many Irish gatherings, Hopkins’ early community homecomings featured fiddle music around the stew kettle, according to Sulphur Springs mayor and local historian John Sellers.

However, as a religious revival swept Northeast Texas in the early 1900s, many Hopkins’ residents found their strict religious values suddenly did not allow for boisterous fiddle music or dancing in their fall celebrations. For example, Sulphur Springs resident C.H. Burns became regionally famous in 1926 after he purchased a fiddle that was allegedly 195 years old. Although he displayed it in his home for guests and took it to exhibit at the Dallas Fair, according to old editions of the News-Telegram, he was forbidden to play it due to his strict Baptist faith.

However, some determined locals with a passion for fiddle music fought for the historical instrument’s place in Hopkins’ autumn traditions.

In the 1920s and 1930s, the Dallas Morning News noted, Cumby, Texas became a mecca for fiddlers, who penned a song based on the town’s previous name, “Black Jack Grove.” Catalogued by the Library of Congress’s American Folklife Center and viewable now by skilled fiddlers and amateurs alike on YouTube.

The tune is typical Texan fiddle fare, with a fast tempo and repetitive 8-bar melody featuring the bow raked in short, successive strokes across the strings. What sets the song apart is that the chorus is a series of shouts and grunts, and the only words sung are “Black Jack Grove!”

It’s not hard to imagine citizens of Cumby gathered at Black Jack Grove Park to celebrate Black Jack Grove Day, clapping hands and keeping time while fiddlers improvised a new tune about their love for their hometown.

From the 1940s to the 1960s, the fiddle only grew in popularity. With the creation of the Reilly Springs Jamboree in 1956 by local country legend Joe Attlesey aka Joe Shelton ‘and his Sunshine Band,’ not only the fiddle but the guitar and banjo became a staple of Hopkins.

During the birth of the fall festival in the 1970s, fiddling was an unofficial but much-appreciated part of the festival. In 1977, entertainment featured singing, bagpipe and fiddle, according to the Echo.

The first mention of the fiddle contest was 1982, and throughout the 80s the contest went strong. In 1989, contest director and national country legend Russell “Pee Wee” Walker informed the Echo that the event was the biggest fiddle contest ever recorded in the state of Texas. With 52 entrants, the number had never been beaten outside of a convention or state fair, he said.

The only one without a fiddle, the Echo said, was Norman Colyer, a tractor mechanic with a love for bluegrass who brought his guitar to strum along, the paper noted. The young man would later go on to become Constable Pct. 1.

The event continued to expand, and new country music legends were cutting their teeth at the fall festival. In 1998, local fiddler and banjo player Willy Sells debuted tunes from his first album, “Love Songs In Velvet,” to crowds at the fest. It was a dream come true for Sells, he told the Hopkins County Echo at the time. In 1999 after playing the fall festival and other area county fairs for several years, Tira native James Hall cut a record in Nashville with the help of Bowie County native Pee Wee Walker and Wood County native Ray Price.

After the fiddle contest had fallen by the wayside, The Old Time Fiddle Players group continued to entertain in Hopkins in places such as Woodhaven nursing home, according to the News-Telegram, but were no longer a part of the fall festival.

There are a few in Hopkins still dedicated to sawing catgut; the Reilly Springs Jamboree is in its 65th year and going strong.

Baking is a staple of Hopkins holidays, and a quick look through area cookbooks like History and Ham Hocks shows recipes that are geared towards food preservation and conservation as well as taste. As a hardscrabble place to come up, Hopkins hasn’t always been a place of plenty, but residents take pride in making what they have taste delicious.

Even in lean times, pie eating contests abounded. Communities such as Brinker, Reilly Springs and Dike had pie eating contests at their fall event, starting as early as 1914 and going on through the 1930s– even during the Great Depression, according to back editions of the Echo, News-Telegram and Cumby Rustler.

However, at some point, competitive eating disappeared from the festival, although it’s not certain when. Although there’s no more pie eating, there is certainly pie making, AgriLife’s Johanna Hicks says, which takes place during the bake show portion of the creative arts contest. Entrants submit not only pies but also cakes, cookies and candy and judges rank the sweet entries.

One key difference– while a young man grinning out from the front page of the News-Telegam’s 1989 Fall Festival edition had a face covered in blueberries, desserts are now no longer destroyed for amusement at the Fall Festival, but rather neatly judged by committee. 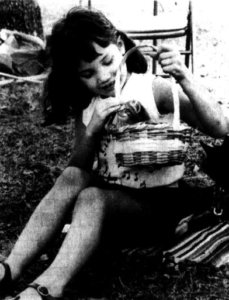 Tonya Meadows, of Sulphur Springs, and her kitten Sniffles at the 1983 pet show/ Hopkins County Echo

The pet show was another of the Fall Festival’s early events. Interestingly, it was not tied to pioneer traditions, but was very popular for decades.

Previously, individual organizations such as North Hopkins ISD and the YMCA held pet shows during the 1960s, according to back issues of local newspapers, which proved a hit.

The fall festival pet show first debuted in 1975, “east of the swimming pool” at Buford Park, according to the Hopkins County Echo. The first show had 175 entries, and categories for the pet show included small, medium and large dog, cat and kitten, fish, rabbit, and fowl.

Of note, the pet show was for domesticated small animals, and was entirely different from the livestock show. Also unlike livestock shows, judging in categories varied. In 1984, prizes were awarded to rabbits for being the littlest, silkiest, and prettiest, respectively. Fowl were awarded prizes for being colorful or large.

The pet show branched in various ways within the festival. The 1980 show featured an entirely separate rabbit show, and 1982’s festival featured a special coonhound category. In 1984, the pet show was separated from the Fall Festival due to scheduling conflicts, but by 1987 they were rejoined. Still, entries were dwindling down to the low 30s.

By the late 90s, categories had evolved in a silly way, featuring “ugliest pet” and “pet and owner lookalike,” according to the Echo. In 1999, the pet show was moved to the Dairy Festival, and in 2000 the county had two pet shows, one at the Dairy Festival and one at the Fall Festival.

After 2000, pet shows went out the way they came in. Individual organizations such as the animal shelter continued to hold them, although they are no longer held today.

A myriad of other events have graced the fall festival, if only briefly. The 1982 festival was the only year to feature an armadillo race. The 1980s had a mule show, and from the mid-1970s to the mid-1980s there was a woodcutting contest, likely another harbinger of the pioneer past of the festival.

A square dance or barn dance was an event that was part of the first fall festival, but stopped being mentioned sometime around the late 80s.

Other former Fall Festival events, such as the milking contest migrated to the dairy festival in June.

While not all of the original Fall Festival events have survived the half-century plus the festival has been around, Hopkins continues to take pride in the pioneer roots of its birth and celebrating agricultural excellence and togetherness.