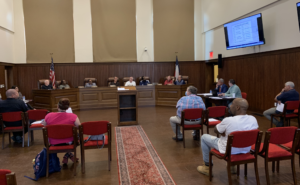 The Sulphur Springs city council debated a 380 agreement for 615 Lamar Street at their regular Sept. 7 meeting, among other items of business.

The 380 agreement for the Lamar Street property originally appeared on the consent agenda, which means it would be automatically passed without discussion. Council member Jay Julian stated he would like to put the property on the regular agenda for discussion.

According to Mayor John Sellers, historically the property belonged to the Kelty family.

Some time prior to 2007, according to community development director Tory Niewiadomski, previous owner Maurice Kelty deeded the property to his son Tim as part of an inheritance.

Julian researched council meeting minutes from 2007 and found that in June of that year, the city declared a building on the property to be in nuisance condition.

“The city did a condemnation for a substandard structure and went through a 180-day process,” Niewiadomski noted. “We then ordered to demolition.”

Julian informed the council that in 2007, the demolition of the structure cost the city $7918.60.

In October 2020, a sale of the property occurred between seller Tim Kelty and buyer Sergio Mendez for approximately $7500, Julian stated.

Now, Niewiadomski presented to the council, Kelty sought the refund of the $7918.60 as it was previously held in lien against the property.

“We previously approved one [a 380 agreement] for 613 Lamar Street, and the applicant [Kelty] thought they submitted one for this one as well,” Niewiadomski said. “He was like, ‘where’s my reimbursement?’ and we had to tell him he hadn’t submitted an application.”

While Niewiadomski noted that “this could have been cleared up if we [the city] were involved from the beginning,” he said it was not unheard of to retroactively grant 380 agreements to property owners, per Texas municipal law.

Overall, said Sellers, he believed the 380 program has been positive.

“This 380 is one of the best things we’ve ever done,” Sellers proclaimed. “I think it’s a great program, and every single one we’ve done, I’ve not had an issue with.”

However, he said, he did take issue with attempting to retroactively apply the 380 policy.

“I think we’re playing a rogue, I think we’re muddying the 380 by talking about reimbursing for something from a while back, and I’m just not comfortable with it at all and I’m not for it,”  Sellers stressed.

Council member Gary Spraggins noted he believed 380 agreements usually applied to vacant lots, and the property at 615 Lamar already has a constructed home. Niewiadomski confirmed Spraggins was correct on the precedent.

And, Sellers clarified, all previously approved 380 agreements have been between the city and the property’s current owner– not the property’s previous owner or a third party. Niewiadomski confirmed Sellers was correct on the precedent.

With no further discussion, the council voted 5-2 to approve the 380 agreement, with Sellers and Julian voting to deny the agreement.