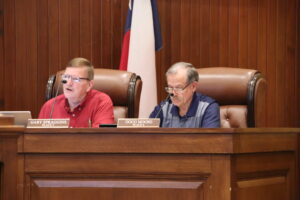 The Sulphur Springs city council debated doubling the amount citizens will contribute to the street improvement fund, among other items of business at the regular September 7 meeting.

STATE OF THE STREETS

Community development director Tory Niewiadomski presented to the council regarding the condition of Sulphur Springs’ streets.

According to Niewiadomski, 45% or more of city streets have not been addressed through improvements in 15 years or more.

Implemented in mid-2019, the Street Improvement Fee has addressed some of this deterioration, Niewiadomski said. Annually, citizens and businesses contribute $500,000 to the fund, and the city kicks in another $500,000.

“This accounts for a little bit more than 4% of our [street] network yearly,” Niewiadomski said. “Overall, it gets us somewhere between three and four miles of repairs.”

Consequently, the budget for repairs doesn’t go far. Only 19 of 92 total miles of streets contained within the city have been repaired within the last five years, Niewiadomski told the council. Citizens have been noticing, the council pointed out.

“Some of our streets will tear up your shocks in no time,” council member Doug Moore added.

Some streets have seen major overhauls, but this is not a necessarily positive development, Niewiadomski reported.

Depending on how often and how well streets are maintained, their useful life ranges from 40 to 75 years, according to the Texas Department of Transportation. The city’s oldest streets, Hunter and Atkins, well outlive this age at 107 years. At nearly 100-year-old, city manager Marc Maxwell described the sewer main of Connally Street, repaired in 2020, as “a cavern in the dirt” due to its lack of maintenance and overall advanced age. Sulphur Springs’ other older streets, such as Locust and Houston, also saw total rebuilds, and College will soon undergo the same process.

According to figures Niewiadomski gave to Front Porch News, it is 44% more expensive to fix these total overhaul streets than regular maintenance streets.

Overall, the Street Improvement Program has been a positive, Maxwell said. The city has been able to extend its summer paving program year-round and is doing the maintenance to make sure streets in the future won’t end up like Houston and Connally.

However, said Maxwell, the city is pulling from multiple funds to gain enough cash flow to make repairs. The general fund, enterprise fund and citizen-contributed street improvement fund all play a part in providing money for streets, he told the council.

“Streets need repair both above and below,” Maxwell noted.

“People always have questions about when their street is getting done, and they’re never happy,” council member Rev. Harold Nash said. “Really, what is the number? What would it cost?”

Depending on what type of repairs are needed and how fast citizens would like repairs to happen, the upfront cost to complete repairs ranges from $12.5 million to $23.5 million.

“For every mile of paving a 28 foot wide street, we can save about $78,355.20 if we pave the street before the subgrade fails,” Niewiadomski urged.

The council then turned their attention to the fee schedule for the street improvement fee. Since mid-2019 when it was implemented, the fee has been set at $5 for residential homes, $5 for multi-family homes, $12.50 for commercial businesses and $30 for industrial businesses.

At this rate, according to Niewiadomski, citizens can expect any given road to be repaired every 27 years.

However, council members considered doubling the rates to $10 for residential homes, $10 for multi-family homes, $22.50 for commercial businesses and $50 for industrial businesses.

At this rate, according to Niewiadomski, citizens can expect any given road to be repaired every 15 years.

“We need to go to at least $10 with all the complaints I hear,” Moore said. “People are damaging their cars. If we can get moving on it, in the future, we’re going to save money.”

“Alignments, tires, wheels, stabilization, it’ll pay for itself,” he said. “If we get it into a 15-year cycle, we’ll get them before they wear out.”

Maxwell noted that the fee would be paid directly into a fund for street repair not used for anything else.

Both council member Freddie Taylor and mayor John Sellers stated a desire to be more proactive and visible in the community regarding street repair.

“We need to be out there, saying what we’re doing and what’s getting fixed,” Taylor emphasized.

“We’re trying, but there’s not enough education about what streets are on there [the street improvement list],” Sellers said. “Maybe it’s my own fault.”

Council member Rev. Harold Nash agreed, expressing there was also not enough education regarding the costs of street repair.

However, the council was not in agreement regarding how much money should be collected from citizens to repair streets.

Sellers stated he was in favor of a graduated fee schedule, and said the council should consider “the times and what’s going on.”

Council member Jay Julian advocated for a “multi-pronged approach” to raising money for street repair, including “aggressively improving the tax base.”

“I know we can’t do that overnight, but it can’t just be the street fee,” Julian said. “It’s got to primarily come from the tax base, aggressively.”

Julian also asked his fellow council members to consider inflation– that materials to maintain and pave streets are getting consistently more expensive, and the value of the dollar doesn’t go as far.

“The longer we put it off, the more expensive it will be,” Moore agreed. “I really do believe it’s in the best interest. It’s like, don’t put a roof on my house and see what happens.”

Ultimately, though, the majority of the council believed raising rates was the way to achieve better roads.

“For 50 years our city council didn’t have the gumption to raise enough money to keep our infrastructure up to snuff,” Spraggins said. “We’re paying for it today… If we don’t make these incremental changes, we’re never going to be caught up with keeping our streets in order.”

The council voted 5-2 to pass the new rates, with Sellers and Nash voting against the measure

“I’m just not there yet,” Sellers said regarding his vote.

The item will have a second reading before citizens at next month’s council meeting.