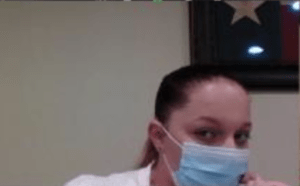 In a social media post, Roberson announced she was no longer a member of the council, “not by choice,” she stated.

Roberson went on to state that due to a city ordinance introduced by herself in April of this year which mandates that city council members be up-to-date on payment of water bills, she was now no longer in compliance due to failure to pay overage fees.

“I have been disqualified from the council by Alderman/secretary/clerk, by MY OWN ORDINANCE [emphasis hers] for delinquency,” Roberson wrote. Roberson stated she was not aware she incurred late fees on her water bill.

Roberson went on to allege “corruption, malfeasance, incompetence and misconduct” by an unnamed member or members of the Cumby council.

It is not clear who will sit in which position on Cumby’s city council, as during a Tuesday special meeting the council did not accept the attempted resignation of mayor pro tempore Sheryl Lackey. A November 2 election has council places 3 (Wayne Mobley) , 4 (Betty McCarter) and Place 5 (Ryan Horne) up for re-election as well.

The City of Cumby declined a request from Front Porch News to state which citizens had filed to run for which places. A special meeting of the city council regarding elections was called for Aug. 22, but later cancelled.