The Grays Building in Pacific Park has officially been completed, but the Senior Activity Center is temporarily on hold, according to the August monthly city manager’s report. 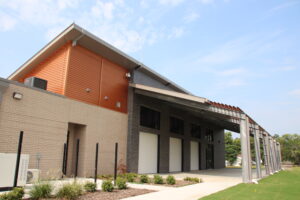 “We are going to call this complete,” said city manager Marc Maxwell, addressing the Sulphur Springs city council during their August 2 regular session.

The building is sufficiently completed to rent out for events, Maxwell noted, and citizens can currently rent the space for the cost of $50 per day. Landscaping outside the building continues as the city works on the park.

“I told some of you in the Downtown-West charette that the doors were going to be installed that week, and it turns out that was all a big lie,” Maxwell said. “The doors that were scheduled to be delivered did not come in, so we fired the supplier for that job and got a second source. At this point, I don’t know when they’ll be here.”

Mayor John Sellers expressed comfort that the building was “at least secure for now.”

While Maxwell said he believes this is a “result of the supply chain disruption,” he also said he finds the metal doors “much less attractive.”

While the city received one bid for construction on the Senior Activity Center, finance director Lesa Smith stated she believed it was “far too high.”

Smith also stated that she received an email from one of the city’s regular contractors, who revealed they believed “the steel market is far too unstable.”

“This is something we’ve heard from several suppliers,” Smith said. “We hope that it will stabilize over the next several months… but we could hope to put it out for bid again with a different result next time.”

Council member Gary Spraggins inquired about the timeline for construction, and Smith stated that construction needs to begin before March 2023 to be consistent with the bond election held that authorized the building of the senior center.

Spraggins advised that he would be telling citizens to “pray for the price of steel.”

“People are saying ‘y’all are just going to put up a tin can metal building,” Sellers said. “Is it going to be as nice as the Gray’s Building?”

Maxwell confirmed that pre-engineered referred to the ready-build nature of the building’s steel skeleton.

“You’ll never see it. It’ll just be steel instead of lumber,” Maxwell said.

With no further discussion, the council voted unanimously to table their single bid for the Senior Activity Center.

“Capital Construction has pretty much completed everything that needs to be done,” Maxwell noted.

One large part of the project, boring beneath Interstate-30, must still be undertaken, however. This must be done because the current infrastructure is too small, according to Maxwell’s report.

The path of the new main begins at Saputo and continues under the interstate. It then continues South for 3,500 feet before connecting to an existing line, and has a 15-inch inch diameter.

Council member Freddie Taylor inquired if there would be a “massive auger on the service road,” and Maxwell confirmed, saying a drill would “slide a steel sleeve with it as it goes.”

A contractor will then install necessary wiring into the steel casing once the auger is finished, Maxwell said.

There is no cost to the city for this work, as the city was the recipient of a $50 million grant from the Texas Department of Agriculture to complete the work.

College Street is slated next for reconstruction after the city completes work on the Saputo sewer project.

Unfortunately, according to Maxwell, due to issues stemming from the COVID-19 pandemic, the city was slow on their summer 2021 goals for the street improvement project.

So far, they have only completed Duckworth Street, Maxwell said.

“We’re having problems getting materials,” Maxwell reported. “That’s why we stopped calling it the summer paving program, because it is rarely completed in the summer.”

Starting August 9, the Sulphur Springs Municipal Airport will begin repaving their tarmac. The city was the recipient of a $1.9 million grant to do so. According to Maxwell, all concrete and asphalt surfaces will be completely rehabilitated and the ramp will be significantly enlarged. The city expects the runway to be closed for a total of nine days over three different paving sessions.

The city council took no action on Maxwell’s report, as none is required.