Daily Devotional from The Way Bible Church for September 20th, 2019

Mark 2:4-5
4 And when they could not get near him because of the crowd, they removed the roof above him, and when they had made an opening, they let down the bed on which the paralytic lay. 5 And when Jesus saw their faith, he said to the paralytic, “Son, your sins are forgiven.”

You’ve heard the saying, ‘Ignorance is bliss.’ In many cases this is how Christians choose to walk out their life of so-called faith. Rather than putting their faith to the test, because of the fear of failure, many choose to deny a problems existence. For instance, you can choose not to look at the grass in your yard as it grows taller and taller but when the bugs and snakes start getting into your home you will wish that you would have acknowledged the problem sooner. Before the paralytic man could be brought to Jesus, the other four men had a choice to make. They could just continue walking past this unfortunate soul every day acting like he wasn’t there until one day he died, or they could acknowledge that there was an issue and deal with it. You see, faith is not denying a problem exists but it’s denying the problem a place of influence. You can’t address something that you refuse to look at. But, if you’ll acknowledge that there’s a problem then you can address it, apply your faith to it, and watch the power of God change it. Once you understand that acknowledging doesn’t mean accepting, you can begin moving toward the promise’s fulfillment. The men in today’s scripture text acknowledged that there was a problem but they refused to accept that fact that it couldn’t be changed. Are you in denial about certain problems or issues in your life? If so, you can overcome them by simply acknowledging them, handing them over to the Lord, and receiving His promise of power to do away with them. Your freedom from what’s hindering is only a promise away. – Love and Blessings, Pastor Jeff

Who are you bringing? As you know, TWBC will be going to 3 Sunday morning services (8:30, 10:00, and 11:30) beginning October 6th. We are doing this in an effort to make room for your family, friends and co-workers who need to have an encounter with the Lord. So pray about who you can bring and where you can help. There has never been a better time to get involved than now. So, who are you bringing? 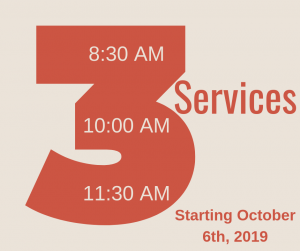