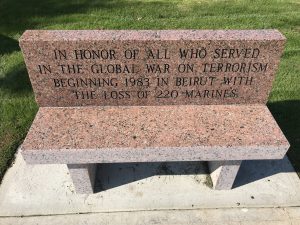 A new bench on the square honoring Veterans who have served in the war on terror was unveiled at the Veterans Day ceremony on Saturday. The engraving reads “IN HONOR OF ALL WHO SERVED IN THE GLOBAL WAR ON TERRORISM BEGINNING 1983 IN BEIRUT WITH THE LOSS OF 220 MARINES”. The 1983 Beirut barracks bombings were attacks that occurred on October 23, 1983, in Beirut, Lebanon, during the Lebanese Civil War when two truck bombs struck separate buildings housing Multinational Force in Lebanon (MNF) peacekeepers, specifically against United States and French service members, killing 241 U.S. and 58 French peacekeepers, 6 civilians, and the 2 suicide attackers. A group called ‘Islamic Jihad’ claimed responsibility for the bombings and said that the bombings were aimed to get the MNF out of Lebanon.  The attack is considered the beginning of the war on terrorism.