Stories Around Texas for March 24th

Two people have died in Titus County after a multi-vehicle accident involving a Mount Pleasant Independent School District bus, an 18-wheeler, and a sedan.

Late Thursday evening, troopers with the Texas Department of Public Safety were called to U.S. Highway 271, about two miles south of Talco.

According to Mount Pleasant ISD Superintendent Judd Marshall, the accident occurred when the northbound 18-wheeler swerved into oncoming traffic. The driver of the southbound school bus, which was carrying the boy’s track team, swerved to the right in order to avoid a head-on collision. 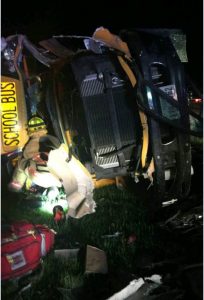 The 18-wheeler collided with a car that was driving behind the track team bus, Marshall said.

The driver of the 18-wheeler and of the other vehicle were killed in the wreck. The driver of the sedan has been identified as Angelica Beard, 30, an assistant coach for the women’s track team, according to officials with the Department of Public Safety.

One coach and one student on the bus were transported by helicopter to ETMC in Tyler. The extent of their injuries is unknown.

As many as 17 other students were transported to hospitals in Titus, Camp and Hopkins counties to receive treatment for their injuries.

Marshall said the driver of the bus was undergoing surgery at ETMC in Tyler and was in critical condition.

Three other coaches were also transported to a hospital.

The girls’ track team school bus was a few miles behind and were not involved in the incident.

A track meet was scheduled for Thursday night in Paris and the teams were returning through Talco, which is about 17 miles north of Mt. Pleasant.

Crews have cleared the wrecked vehicles from the roadway. A towing company is expected to remove the school bus from the side of the road after daybreak on Friday.

Secondhand Smoke Harms Your Loved Ones by Johanna Hicks