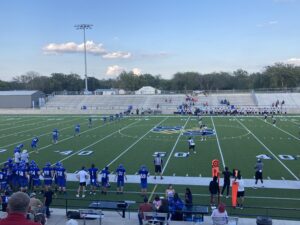 The Freshman Wildcat football team took on Crandall Thursday night at home for a 27-47 loss. The night had a great start with the first play of the game a fumble recovery by DeEric Benitez (21). The Wildcats were able to move the ball down to the goal line but were unsuccessful in pushing forward to cross the line for a touchdown. The defensive team came onto the field and were able to hold Crandall close to the end zone, forcing a punt in the fourth down and the Wildcats started their second drive from Crandall’s 40-yard line.

The first move off the line, Dedrick Rose-Luke (3) takes the ball all the way back to the end line with about a foot to go. Crandall makes the stop and regains possession of the ball. Crandall moves the ball down the field and makes a successful long pass to run the ball in for the first touchdown of the game making the score 0-7 Crandall.

The Wildcats have the ball again and the fans are in for a treat. Kaden Mitchell (1) throws the ball deep to Skylar Lewis (16) into the end zone for the first Wildcat touchdown. The extra point is good to bring the score to an even 7-7 tie.

Crandall makes another run resulting in a touchdown. The extra point is good and Crandall is up again 7-14. A hand off to Dedrick Rose-Luke (3), he runs it up the middle for a touchdown. The score is now 13-14 Crandall.

A pass to the right side with a long run across the field and into the end zone results with another Crandall touchdown. The score is now 13-21 Crandall. We go into half time down on points but are rewarded by the hard work of the Freshman cheer squad to get the crowd excited for the second half. That excitement would have been great, except for some AV trouble and the team had to wait for the sound booth to get the music set correctly. The Freshman cheerleaders did a great job! 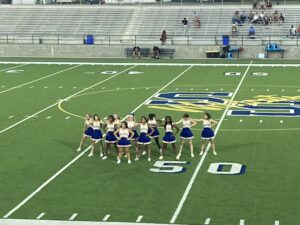 Both teams take to the field after a short half-time, which resulted in Crandall making the first touchdown in the second half bringing the game to a score of 13-28. Those Wildcats are not to be left behind for long. A nice, completed pass to Malachi Clayton (39), with a completed 2-point conversion by Larren Vaughn which brings the score to 21-28 Crandall.

An up and arching throw deep into the end zone for Crandall results in another touchdown bringing the score to 21-35 Crandall. The Wildcats turn it around and Larren Vaughn (2) has a great run for another touchdown. The score is now 27-35 with Crandall still in the lead.

The Wildcats fought hard against Crandall and did not give up. In the end their efforts were not quite enough to get the “W.” Next week they face off with Ennis at Ennis.