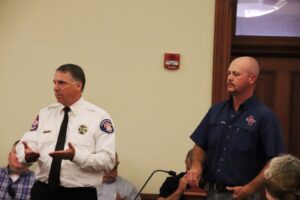 Hopkins County Fire Station and Sulphur Springs Fire Department intend to apply for a grant to replace all existing radios, per a decision by the Hopkins County Commissioners Court at their regular September 13 meeting.

Hopkins County fire marshal Andy Endsley and SSFD fire chief David James presented to the court a request to apply for a regional communications grant, which the court unanimously approved.

“We are beginning the process to start a regional grant for communications for mobile radios [and] handheld radios,” Endsley told the court.

Endsley further informed the court that the two departments plan on replacing all radios for not only Hopkins County Station 20 and both Sulphur Springs stations, but for all county volunteer stations and Hopkins County EMS as well.

“The amount of radios we have right now– well, it’s zero,” Endsley admitted. The county was a recipient of a similar grant in 2016, Endlsey said. Although in 2016 Hopkins County law enforcement was included in the grant, in 2021 the grant parameters have changed.

“Any time we can get together on it, it helps all of us,” Endsley said. Hopkins County fire and SSFD have been in talks about their radios since February of this year, the men said.

A main problem, according to James, is how quickly the radios become obsolete in the fast-paced world of technology.

“They tell you it’s the latest greatest, but three years later it’s junk,” James said. “We can’t get parts, or so they tell us. It’s like thirty-six months we start all over again.”

Endsley told the commissioners that the age of the current radios was five years, and they had extended far beyond their useful life.

Each radio costs at least $600 and there are over 70 vehicles to outfit between the county and the city, James told Front Porch News. This does not begin to factor in the cost of infrastructure to support the radios, such as repeaters and any hardware they may need.

The cost to replace the radios without a grant could approach $2 million or more, James noted.

“It’s hard that we have to put so much money into it. It’s so expensive,” Endsley told Front Porch News.

The commissioners also approved a request from Endsley and James to contract Vickers Consulting Services, Inc., to prepare the grant. Endlsey and James stated they had used Vickers previously and were pleased with the outcome.

“This is a very much-needed grant,” Endsley stressed. “It’s time to update our radios.”