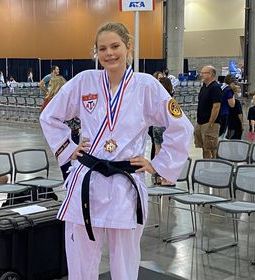 While the Olympics are ongoing in Tokyo, local martial arts practitioner Karisma Stegient, of Sulphur Springs, has medaled prestigiously in the Martial Arts World Tournament of Champions.

After the COVID-19 pandemic ended Stegient’s season, the Hopkins County student won the right to enter the championship level tournament and attempt to fight past the top ten with a combat sparring victory at district championships in July.

Stegient’s victory in the second and third degree black belts, age 13-14 category is her first world medal. Karisma joins her older sister, Harleigh, who won bronze in 2018 in the same category.

Stegient was seeded ninth overall, and faced off against some of the world’s best 13-14 year-old black belts. With a 10-6 record in the semi-finals, Stegient entered the match for the bronze tied 7-7 with the number three seed. A decisive late-match point earned Stegient her bronze finish in sudden victory.

Other notable finishes include Sulphur Springs’ Daron Bilyeu, who completed the tournament with fourth place in the mens’ 40-49 black belt category.