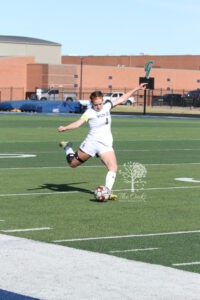 The Lady Cats traveled to Longview for their first game of tournament play for the 22-23 soccer season. Their first match up was Carthage.  Sulphur Springs Lady Cats maintained possession of the ball for the majority of the first half of the game.  They did well with give go passing, 1 to 1 challenges, and receiving the ball, to ultimately dominate the first half of the game. Late in the first half Kylie Clark put up the first points with a breakaway run to score. Carthage attempted to score but Sophomore Mya Olvera stopped the shot at the Sulphur Springs goal.

Middle of the second half Clark scores her second goal with a run up the middle and a shot outside the 18. A throw in pass to Anna Williams for the 3rd goal. Cross by Addy Fenton with another goal by Williams. The Lady Cats pulled out a strong first win of 4-0.

Fridays action had the Lady Cats up against Hallsville in an early afternoon game at Kilgore High School stadium.  Hallsville scored first on penalty kick resulting from a hand ball in the box. Sulphur Springs answered with a penatly kick of their own, shot by Hayley Shultz, from a tackle in the box. Tied game 1-1. Hallsville scored again on a breakaway pass to the outside. A late in the first half drive to the goal, Sulphur Springs scored by Shultz only for the ref to call it back stating no more time on the clock. 2-1 Hallsville going into halftime. 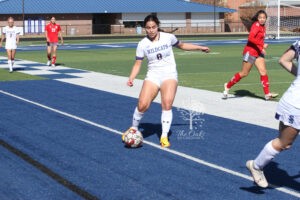 The second half of the game Sulphur Springs maintained possession of the ball and should have had a few more goals.  The Lady Cats fought hard  to keep Hallsville from scoring again and ended up falling short of the win.  The game closed out with Hallsville taking the win 2-1.

Last game of the tournamnet saw the Ladycats play against Jacksonville.  Jacksonville put up the first goal against the Ladycats. The Ladycats answers with a goal of their own by Shultz from a pass from Fenton. A second half late goal by Jacksonville to made the game 2-1.  Sulphur Springs kept pushing towards the goal and kept out shooting on Jacksonville but their scorning opportunities were either stopped by the keeper or went a bit wide of the goal.

Next week sees the Sulphur Springs Lady Cats playing in the Pine Tree tournament starting on Thursday and going through Saturday.  They are bound to see more great games.  Their season is starting off strong with a few bumps in the road.  The new coaching staff is working hard to bring the girls together in a cohesive unit that goes out and wins games.