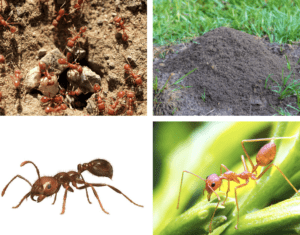 During a recent trip to a producer hay field I noticed several ant mounts in his field. If you are having ant problems, the first step is to identify the species.

There are hundreds of ant species in the southern United States, including some native fire ant species, and most of them are considered beneficial insects. Collectively, ants till more earth than earthworms and some prey on other insect pests and help reduce their numbers.

Fire ants will build their mounds almost anywhere—in the open or next to a building, tree, sidewalk or electrical box. A fire ant mound does not have a central opening. When the mound is disturbed, fire ants emerge quickly and begin biting and stinging. They will even run up vertical surfaces. Worker fire ants are dark reddish-brown with shiny black abdomens, and are about 1⁄16 to about 1⁄4 inch long. 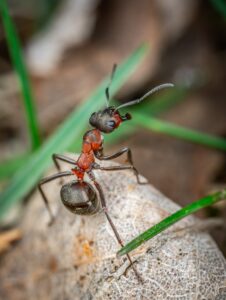 Fire ants can’t be eliminated entirely because it’s not possible to treat all areas that are infested. Thus, the goal of current integrated pest management (IPM) programs is to suppress fire ants as much as possible with biological control methods and use insecticides only where it is economically and environmentally justifiable to do so. There may not be one “best” method for fire ant control, especially in large areas.

Your objective should be to find the method or methods that are most cost-effective and environmentally sound. In areas where these ants do not present problems, doing nothing is certainly one option.

Step 1. Broadcasting an insecticide bait once or twice a year, which reduces fire ant colonies by 80 to 90percent.

Step 2. Treating nuisance mounds or colonies that move into the bait-treated areas. Step 2 may not beneeded. This is likely to be the most cost-effective and environmentally sound approach to treating medium-size to large landscape areas. Certified organic products can be used for broadcast bait and mound treatments. For livestock pastures, select products registered for use on such sites, such as Amdro Pro®, Esteem®, Extinguish®, or Extinguish Plus®. The bait you apply determines how quickly ants will be controlled and how long the effect will last. Faster acting bait products include indoxacarb (works in 3 to 10 days), hydramethylnon (works in 7 to 14 days for mound treatments and in 2 to 3 weeks.

While The Iron Is Hot by Dr. Juan Harrison