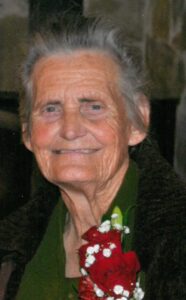 Thelma Elliott was born January 21, 1932 in Fulton, AR to George Moody and Polly (Willett) Moody. She married Thurman Elliott in Rockwall, TX on January 12, 1948. During her working career, she was a seamstress and a dairy farmer. She was a member of Winnsboro House of Praise.

She was preceded in death by her husband, Thurman; son, Jerry Elliott; mother, Polly Moody; four sisters; and one brother.