It’s been a busy week for the Sulphur Springs Wildcats, as they’ve been playing in the Allen Tournament. Sulphur Springs won their first game Tuesday, before splitting a pair of games Wednesday against Frisco Independence and El Passo Andress. Today they wrapped things up with one final game against the Rowlett Eagles.

The Eagles looked to be a good test for Sulphur Springs, as they are one of the biggest school’s they have faced so far. With district play right around the corner, competing against 6A school’s could be a perfect test for the Wildcats. 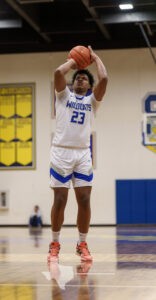 Senior big man Kordrick Turner had another 20-point outing to help get the 61-52 win over Rowlett.

The Wildcats opened the game as they have so many others, getting out to a quick start. Head coach Brandon Shaver has always emphasized the opening minutes of a half and today was no different, as Sulphur Springs got out to a quick 7-0 lead.

The two kept things going for the Wildcats, as Turner got a pair of free throws to go, before Lynn knocked down another 3-pointer. Despite the scoring from Sulphur Springs, Rowlett was able to find their rhythm offensively, going on a 15-7 run to end the frame. 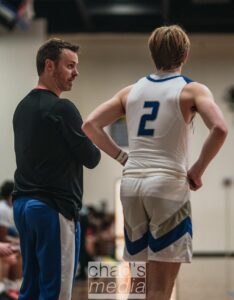 Senior point guard Branson Lynn was on fire Thursday, knocking down four 3-pointers in the first half against Rowlett.

Senior Parker Whisenhunt scored the final points of the opening frame, as he was able to draw a foul with just 0.2 seconds on the clock. Whisenhunt knocked down both of his free throws, making it a one-point game at 15-14.

The duo of Turner and Lynn kept the offense going in the opening minutes of the second quarter. Turner scored in the post thanks to a Malachi Myles assist, and Lynn followed with a very deep 3-pointer.

From there it was Myles who would control the Wildcats offense, scoring six consecutive points in the paint. Myles received assists from Turner and Lynn, and was also able to score on an offensive rebound, something he has excelled at in his career.

The 6-0 run from Myles forced Rowlett to call a timeout, with Sulphur Springs now in the lead at 25-22. The Wildcats didn’t let the timeout slow them down, however, as they finished out the half on a strong note.


Lynn knocked down his fourth 3-pointer of the half, giving him 12 points before going into the locker room. The final score of the half for Sulphur Springs came from Whisenhunt, who attacked the basket strong and got a layup to go. Rowlett answered back with one final basket of their own, cutting the Sulphur Springs lead down to 30-26 at the end of the first half. 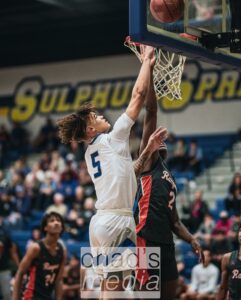 Senior Malachi Myles had one of his best outings of the year, setting a new season-high of 16 points.

The third quarter was when the Wildcats were able to turn things up a notch, taking complete control of the game. Lynn opened the frame with another 3-pointer, and the momentum was fully on Sulphur Springs’ side.

Turner and Myles dominated the remainder of the frame, trading baskets and setting the tone. Turner and Myles each scored on putback’s from offensive rebounds, before each scoring on backdoor layups assisted by one another.

After getting his teammates involved, Lynn created another basket for himself, once again forcing a steal on defense. Lynn went the length of the floor, beating his defender with a behind-the-back dribble. After shaking off his man, Lynn pulled up from behind the 3-point line, setting his feet and getting the shot to go in, giving Sulphur Springs a 50-37 lead at the end of the third quarter. 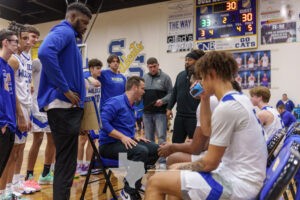 Sulphur Springs had a great week, going 3-1 and being a buzzer-beater shot away from a perfect 4-0 in the Allen Tournament.

The fourth quarter went very similarly to the third quarter, though the offense did slow down a bit. Turner and Myles continued to do their work inside the paint, scoring a combined nine points in the frame.

Sulphur Springs also continued to play strong defense, never allowing Rowlett to get themselves back in the game. The final basket of the game for Sulphur Springs came on an open layup from Myles, who received an assist from Turner, as the Wildcats would hold on to the 61-52 win.

Turner was once again the leading scorer for Sulphur Springs, having another 20-point outing. Eight of his points came in the third quarter, as he dominated in the paint for the majority of the second half.


Just behind him was Lynn, who has been light’s out from behind the 3-point line lately. Today continued that streak, as he had 18 points, all of which came via the deep ball.

Also finishing in double-digit’s was Myles, who set a new season-high with 16 points. Myles was a big part of putting the game away, leading the team with six fourth-quarter points. 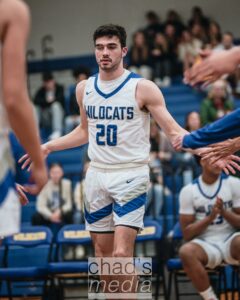 Senior Parker Whisenhunt had six points, as well as a few assists to help his team get the 9-point win Thursday.

Whisenhunt added six points for the Wildcats, while also dishing out a number of assists. The only other player for Sulphur Springs to score was Macaulin Rollison, who knocked down a free throw early in the final frame.

The win is the 18th of the season for Sulphur Springs, making them 18-5 going into district play. The 61-52 win also makes the Wildcats a perfect 13-0 when scoring 60 or more points in a game.

“It was a great week against 5A and 6A competition,” coach Shaver said, after his team went 3-1 in this week’s tournament. “We play in these tournament to keep fine-tuning the things we need to for district. To come off five days without being able to practice and go 3-1 against this level of competition is a great week for us!”

Not only did the Wildcats go 3-1 in the tournament, but they were a buzzer-beater shot away from going a perfect 4-0. “We have two more games before we start district against some great competition,” Shaver added.

“What I like is we have five days to be able to practice before we play again. We are in a good spot but still have stuff that we need to clean up before we are where we want to be. These five practices will help us a lot.”

With district play right around the corner as Shaver mentioned, the season is starting to heat up. Sulphur Springs’ district opener is Friday, Jan. 6 at Anna. A live broadcast of that game, as well as the remainder of the district games, will be aired on Front Porch News and Chad’s Media.

4H A Year in Review by AgriLife’s Mario Villarino

While The Iron Is Hot by Dr. Juan Harrison