Wildcats back in the win column with home victory

The Sulphur Springs Wildcats returned home for the first time since Nov. 22 Tuesday, hosting Texas High for a non-district match. The Wildcats have opened their season on a strong start, going 13-3 and garnering attention from outside sources. Prior to Tuesday’s game the Wildcats were ranked No. 8 in the TABC Poll, as well as No. 5 in the GASO poll. 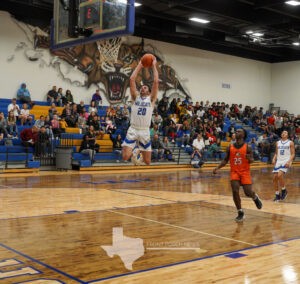 Parker Whisenhunt throws down a huge dunk in the first quarter of Tuesday’s 66-54 win, finishing with 15 points.

The game opened with a back-and-forth first quarter, with neither team able to gain much of an advantage over the other. Senior Parker Whisenhunt paced the offense in the early going, scoring seven of the team’s 16 first quarter points, helping the Wildcats get out to a 16-13 lead at the end of the first frame.

The second quarter is when Sulphur Springs was able to take full control of the game, having both their highest scoring frame of the night, and holding Texas High to the lowest scoring frame. It was another pair of seniors who provided most of the offense in this frame, as Kordrick Turner had 10 points, while Malachi Myles was right behind him with nine points.

The two combined for 19 points, while Texas High was able to score just nine points in the quarter. Another four points from Whisenhunt gave the Wildcats 23 points in the frame, and helped them take a 39-22 lead at the end of the first half. 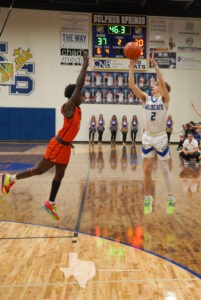 Branson Lynn was dialed in from long range Tuesday, going 4-6 from behind the 3-point line.

Working with a 17-point lead entering the second half, Sulphur Springs was able to slow things down a bit offensively, though they still stayed in control of the game during the third quarter. This time it was senior Branson Lynn leading the scoring, knocking down a pair of three-pointers.

The third frame was the lowest scoring frame of the night, seeing the two teams combine for just 27 points. The low scoring frame helped Sulphur Springs however, keeping Texas High from mounting a comeback.

It wasn’t until the fourth quarter until Texas High was able to outscore the Wildcats in a frame, though by then it was too-little-too-late. Sulphur Springs never let things get within single-digits, winning the game by a final score of 66-54.

Turner was the leading scorer for the Wildcats, having yet another 20-point outing. The bulk of Turner’s points came during the second quarter when he was able to help Sulphur Springs take full control of the game, scoring 12 points during that stretch. Turner also had 10 rebounds, giving him his ninth double-double of the year. On the season he averages just shy of a double-double, averaging 16.2 points and 9.8 rebounds per game. Turner also did a great job finding his teammates, leading the team with six assists. 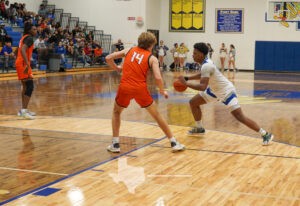 Kordrick Turner led the team with 20 points and 10 rebounds, giving him his 9th double-double of the season.

Just behind him was Whisenhunt with 15 points. Entering last night’s game Whisenhunt was the leading scorer for the Wildcats, averaging 16.5 points per game on an efficient 56.1% from the field. Whisenhunt kept the efficiency going, shooting an even 50% from the field in Tuesday’s win, going 7-14. Whisenhunt also tied with Turner for a team-leading six assists, marking a new season-high for the senior wing.

The scoring didn’t stop there, however, as the Wildcats had two other players who scored in double-digits. Myles was next with 13 points, nine of which also came during the second quarter, while he and Turner led the team to a 23-point frame. Myles was very efficient, making six of his seven attempts from the field, shooting 85.7%. For the season Myles’ field goal percentage is 63.8%.

Lynn was right behind him with 12 points, on a night in which he was dialed in from behind the 3-point line. Lynn made four his of six 3-point attempts, bumping his 3-point percentage to a solid 36%. Lynn also did a great job on the glass, pulling in a season-high five rebounds, all of which were defensive rebounds. 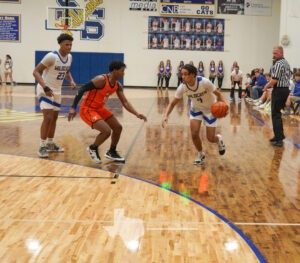 Theo Mckelvey drives to the goal, picking up one of his two made baskets Tuesday.

DJ Wilkerson also played a big role in Sulphur Springs’ win, despite not scoring. Wilkerson dished out three assists, grabbed two rebounds and forced one steal, while having a +/- of +12, tying with Lynn for the third-highest on the team.

Lane Hunt and Jaxon Shaver each saw action in the game as well, making a total of nine Wildcats to get minutes. 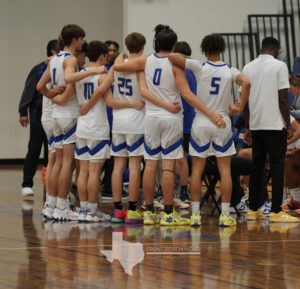 Sulphur Springs picked up their 7th win in their last 8 games, improving to 14-3 to start the year.

The win pushes the Wildcats record to 14-3 on the season and gets them back in the win column after falling to Fort Bend Marshall in their most recent outing. Prior to that loss, the Wildcats had been on a six-game winning streak and last night’s win marks the seventh win in their last eight games.

Tuesday’s home match is the first of three consecutive games at home. They will also host Nacogdoches Friday, before hosting Bullard Tuesday, Dec. 20.

Here’s to a Healthy Holiday! by AgriLife’s Johanna Hicks

The Good and the Bad by Dr. Juan Harrison