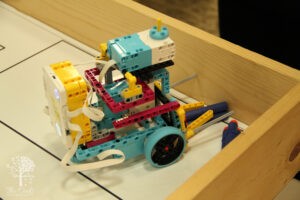 The Sulphur Springs Middle School robotics club hosted their first robotics tournament on Wednesday, November 30 at the Civic Center.  There were a total of 37 intermediate teams consisting of 4th – 8th grade.  As well as 17 advanced teams ranging from Middle School students to High School students.  In this competition the teams had to work with teams from a different school to clear the field during a pre-programed sequence and then switch to a driver mode and continue to clear the field and place pieces in a specific container on the field of play. 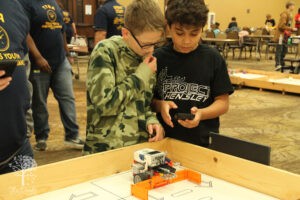 The first part the students compete in, is when they place their robot in the safe zone of the field and have it pre-programed better called an autonomous run period that is 30-seconds in length.  The goal is to move as many pieces on the board to the safe zone before the time ends.  In the next phase of competition the students will attach a “driver control” to the robot and will then have 90-seconds to “manually” control the robot and clear the board or place objects into the cup that is placed on the far side of the playing field. 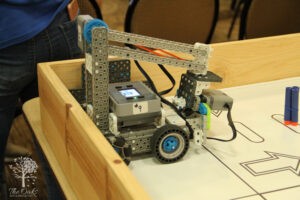 In this phase the students can have the robot grab lego pieces that are in the center of the two boards and place them in a cup for additional points.  They can also take the dice that are on the board and either place them in the cups or in the safe zone for added points.  The team with the most points at the end of three qualification matches will be the winners.   The fun does not stop there, the top 16 teams will proceed to a Finals Tournament, the teams will be organized into alliances of the students choosing.  From there it becomes a single-elimination to determine who the champions of the day will be. 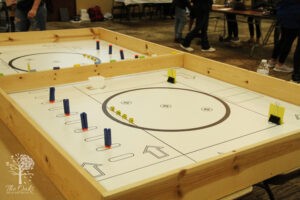 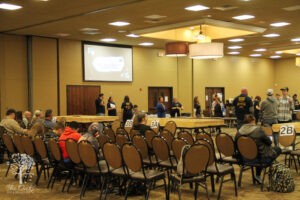 There are multiple ways in which the teams can earn points to advance in the competition.  One intricate portion of the competition is the attachment of a Gantry Crane to the wall.  The students can only build the crane during the 30-Second autonomous period of play.  Points awarded are based on the number of cranes installed for a total amount of 100 points possible.  While in attendance I did not see this accomplished but I think that would have been amazing to see.  By far the most amount of points that can be earned is by placing “cargo” into the “shipping container.” Each item placed is worth 20 points, for a total amount of 360 points possible.
The first ever robotics competition held in Sulphur Springs was a huge success.  Schools from all over the North East Texas area came to compete and show off their building and programming skills.  The hope for more competitions held in our area should be good based on the success of this one.  Thank you to all the individuals who helped to make this a reality.  GO GO CARGO!