The Sulphur Springs Wildcats hosted the Community Braves Friday night, looking to open district play with a win. After going 4-1 in the non-district portion of their schedule, the Wildcats were hot, and looking to add even further to their momentum.

The game opened slowly, with neither team able to find much of a rhythm offensively. Despite usually getting out to very quick starts, Sulphur Springs went three-and-out on their first drive, needing a bit more time to find their pace.

The Wildcats defense was able to keep Community’s offense at bay as well, with both teams tied at 0-0 at the end of the first quarter. Early in the second quarter the Wildcats were able to drive into opponent territory, though it looked like their offense may be stalling out. 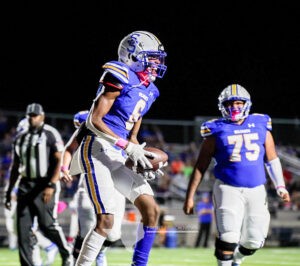 Sophomore Sylar Lewis celebrates his third touchdown of the season, during a 3 catch night for 31 yards.

This time, they dialed up a pass to sophomore receiver Skylar Lewis, who made a great catch on the sideline, keeping both feet in bounds and once again picking up the first down, this time getting to the 12-yard-line. On the very next play quarterback Brady Driver once again called Lewis’ number, hitting him on a 12-yard slant pass for the first touchdown of the game. The score was the third of the season for Lewis, and put the Wildcats ahead 7-0 early in the second quarter.

The Wildcats defense continued to play strong, getting their team the ball back quickly, forcing Community to punt once again. The Braves got a great punt off, putting Sulphur Springs at the 27-yard-line, needing to go 73 yards if they wanted to find the end zone again.

The drive opened with a 13-yard run from Williams, who took the bulk of the snaps at the running back position. The Wildcats gave the ball to him on the next two plays, picking up about eight yards on each run, getting another first down and putting them in Community territory.

Just two plays later, Driver went back to Williams, this time in the air on a second-and-nine, and Williams was once again able to gain enough yards for the first down. Later in the drive, on third-and-six from the 31-yard-line, Driver kept the ball himself, breaking off more than enough for the first down, and finding the end zone, extending the Wildcats lead to 14-0.

Community got the ball back with just a few minutes left in the half, and at the rate their offense was moving, it didn’t look like they would have enough time to score. They quickly found themselves in a fourth-and-four situation, in which they decided to go for a fake punt.

Though they were able to get the pass off, it was incomplete, turning the ball back over to Sulphur Springs. The Wildcats were out of timeouts, but needed to go just 35 yards with 1:20 left in the half.

They opened the drive with Driver keeping it himself, picking up a few yards. The next few plays were unsuccessful however, making it fourth-and-seven. Sulphur Springs also took a delay of game penalty, pushing the ball back five yards and making it a fourth-and12.

Based on where the ball was and how much time was on the clock, coach Faircloth and his team elected to go for it, giving themselves a chance to score one final time. Driver rolled out and hit Williams for a big gain, picking up the first down and putting Sulphur Springs inside the red zone with 40 seconds left in the half.

On the following play Driver picked up another nine yards with his legs, putting them at the 11-yard-line with 32 seconds. After an incomplete pass, Driver handed the ball to Williams who picked up the first down and got the ball to the six-yard line, though time was running out.

The Wildcats ran back up to the line of scrimmage and clocked the ball with just 14 seconds left. After an incomplete pass, Sulphur Springs found themselves in a third-and-goal situation with just nine seconds on the clock. 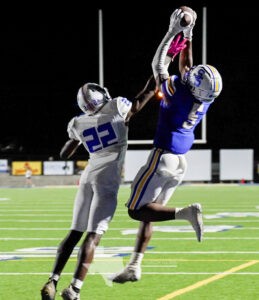 CJ Williams caught his fifth receiving touchdown of the season Friday, pushing the score to 21-0.

On the third-and-goal Driver threw a high pass in Williams direction on the outside, throwing it high enough to where only Williams could get it. Williams jumped over the defender, coming down with the ball and catching his fifth receiving touchdown of the season. Sulphur Springs knocked down the PAT, giving themselves a 21-0 lead at the end of the first half. Despite a slow opening frame in which nobody scored, the Wildcats were able to put 21 points on the board in the second quarter to take a three-score lead into the half.

Community got the ball to start the second half and put together a very long successful drive. After using almost nine minutes of the clock, the Braves found the end zone for the first time, cutting the deficit to 21-7 and making it a 14-point game.

Once Sulphur Springs got the ball back the put the ball in the hands of Williams once again, who picked up over 10 yards and put the Wildcats at the 50-yard-line. On the following play, however, Driver threw a pass which the Community defense was able to pick off.

After the return, the Braves had the ball in Wildcats territory, with a chance to make it a one-score game late in the third quarter. With the ball on the 37-yard-line, it was the Wildcats defense who once again came up huge for their team.

Senior Drew Hodges was able to get to Community’s quarterback, stripping the ball out of his hands. Hodges was also able to get on the ball, not only forcing the fumble, but recovering it as well. Hodges, who had a great night, would go on to be named the Slaughter’s BBQ player of the game from the Chad’s Media broadcast.

The Wildcats wasted no time swinging the momentum back in their direction, driving all the way to the 24-yard-line on yet another huge run from Williams. That took the Wildcats into the fourth quarter, leading by 14 and with a chance to score again, having the ball at the 20-yard-line.

In the fourth quarter, Driver kept his great rushing night going, picking up 19 yards to get Sulphur Springs to the 1-yard-line. He finished the drive off on the following play, with his second rushing touchdown of the night and his sixth of the season, putting the Wildcats up 28-7.

With the big lead and time running low, the Sulphur Springs defense still never let their foot off the gas, forcing Community to punt from the 21-yard-line on a three-and-out. The snap went over the punter’s head, all the way back to the end zone.

Though he was able to pick the ball up, the Wildcats defense was all over him. The Community punter was able to get the punt off, but directly into the chest of a Sulphur Springs defender. The ball went through the back of the end zone for a safety, pushing the Sulphur Springs lead to 30-7 and giving them the ball back.

Freshman Jaxson Haire had a great return after the kick, putting Sulphur Springs just 30 yards away from another score, with a little over eight minutes left to play. Later in the drive, Driver rewarded Haire, hitting him on a 19-yard touchdown pass, Haire’s third of the season, to bring the game to the final score of 37-7.

Community ultimately tried to put together one more scoring drive, but they would fall short when senior Riley Hammons came up with his third interception of the season to put the game away. “The defense was phenomenal,” Hammons said after the game. “For two weeks we’ve been practicing hard, they didn’t act like it was an off week [last week] they acted like we had a game [last Friday] so two weeks of this just made us better at the Wing T and we have two weeks of the Wing T after this, I think we look good, it’s been great.”

The win was a huge one for the Wildcats, opening district play with a win and pushing their overall record to 5-1 on the season. It also goes a long way towards helping the Wildcats with their playoff chances, putting them in great position to earn a playoff berth.

Driver had yet another excellent night at quarterback, finishing with five total touchdowns. His three passing touchdowns gives him 13 on the season, as his two rushing touchdown gives him six, putting him at a total of 19 touchdowns to just three interceptions.

Driver also finished as the leading rusher for the Wildcats (108 yards) though Williams was right behind him with 105 rushing yards. Williams also led the team in catches (4) and receiving yards (41) along with a receiving touchdown.

Lewis had a strong game receiving as well, catching three passes for 31 yards and also catching his third touchdown of the season. “It means a lot, we haven’t really done that in a long time,” Lewis said after the game, in reference to their district opener win. “It’s just a pleasure to be up.”

Lewis also spoke about making the jump from the freshman team last season to being a key contributor on varsity as just a sophomore. “It’s a lot [of difference] it’s on Friday’s instead of Thursday’s, under the light’s, there’s so many people in the stands that are screaming, it’s so loud, it’s like an opportunity to be bigger.”

While the Wildcats were great on offense, they were once again great on defense. For the fifth time this season Sulphur Springs was able to keep their opponent under 20 points, walking away with the win in all such instances.

“It’s a goal that we set in the beginning [to win the district opener] and it’s just a great opportunity for our kids to see the hard work paying off,” Wildcats defensive coordinator Bret Page said.

Now with a 5-1 record on the season and a 1-0 district record, the Wildcats will look to keep their momentum going when they travel to Mabank this week. Mabank is 3-3 on the season, but lost their district opener last week to Anna, falling by a score of 40-0.

For anyone who can’t make it in person, join our live broadcast of the game starting at 7 p.m. Friday. You can find them game on the Front Porch News Facebook or at Youtube.com/ChadsMedia.

The Seasons of Your Cycle by Dr. Hailey Jackson