The Sulphur Springs Wildcats football team wrapped up their first week of camp Saturday, with a morning practice at Gerald Prim Stadium. The first hour of practice was a more traditional practice, with the second-hour being reserved for team drills and situational drills, to replicate that of a scrimmage. 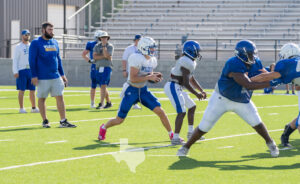 Quarterback Brady Driver drops back for a pass.

The practice went well, with both the offense and defense showing they are ready to get the season started. After the practice was over, I was able to catch up with Coach Faircloth to speak about how the first week of camp went.

“It was an awesome first week,” Faircloth said. “You couldn’t have asked more from the kids and the coaches. Just great energy, great enthusiasm. Today was our 11th practice, and ya know, that first week is a grind, but man credit to them, they came in focused everyday, worked hard and kept the energy up. I’m really proud of them.” 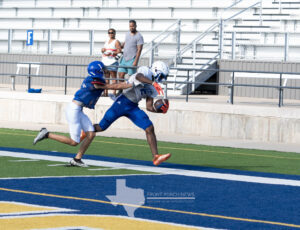 “We’re making progress,” Faircloth said, about where his team is at. “We have a long way to go, there’s no doubt about that, but we’re making progress. I think we’ve got kids on both sides of the ball that are playing really hard and playing really well, so, we’ve just got to continue to get better everyday and stay humble, which isn’t hard to do.” 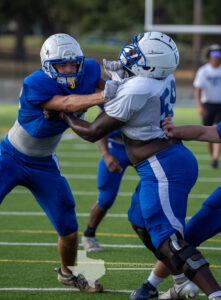 Coach Faircloth emphasized how well his offensive and defensive lines have played.

“And our offensive line, we’re kind of building them as we go, but man, they are really coming together, kind of meshing well together and playing really well together, both units are doing some really great things right now.”

The Wildcats enter the second week of camp, which according to Faircloth will look very much like the first week. He emphasized that the team will continue to go 100mph and try to to put themselves in as good of a position as possible heading into their season.

Sulphur Springs’ first scrimmage is Friday at 7 p.m. at home. They will be going up against Lindale in the scrimmage, before traveling to Wills Point next week for their final dress rehearsal before their season opener Aug. 26.