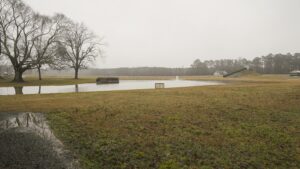 A frequent complaint of pond owners, especially after filling newly constructed ponds, is a muddy, dirty, or turbid appearance. According to Texas A&M AgriLife Extension, many owners wish for clear sparkling waters but are instead greeted by muddy ponds containing water that resembles chocolate milk. Turbid water, or turbidity, is caused by suspended organic and inorganic particles in a body of water that reduce clarity.

In a muddy pond, it is primarily suspended clay particles that produce the turbidity. It is important to understand the problems that turbidity produced by suspended clay particles could potentially cause in a pond’s ecosystem. Clay turbidity in ponds reduces the ability of light to penetrate the water to depth, which results in reduced amounts of phytoplankton, and subsequently, reduced natural oxygen production and food for fish. Not only could muddy or turbid water cause stunted growth in fish, but overall aesthetics of the pond can be reduced.

Another concern of muddy ponds is that suspended solids can lead to undesirable flavors, often referred to as “off-flavors,” in fish harvested from the pond. Muddiness of ponds can also promote the growth of bacteria and blue-green algae, which can lead to health problems for aquatic organisms, humans, and animals that may swim in or drink from the pond. Most pond owners desire completely clear ponds that look “aesthetically pleasing,” but due to lack of nutrients and associated food, this can also cause detrimental effects for fish populations if the pond owner is concerned about maintaining a good fishery.

Completely clear water means there is no food in the water column for small fish to eat. Ponds can appear muddy for various reasons. The most common causes for muddy ponds are new pond construction in clay soils, rainfall/runoff, erosion from wave action and other sources, and animals. One may wonder how these factors can cause a pond to become muddy, or turbid. To retain water, ponds must be constructed in, or lined with, clay-rich soil. Clay soils contain tiny, negatively charged clay particles that can suspend in the water, ultimately causing the appearance of muddy water. Runoff from a rain event can also bring clay particles into the pond from the surrounding environment.

Turbidity can result from high winds, abrupt changes in air temperature, and excessive rainfall disturbing clay particles, causing them to become suspended in the water. Wildlife, such as ducks, beavers, muskrats, and wading birds; livestock wading in or drinking from the pond; invasive species such as common carp, nutria, and feral hogs; and aeration systems can also cause suspension of clay particles.

In some cases, fish species intentionally stocked into the pond, such as grass carp or catfish, can stir the bottom sediment, causing turbidity.

For more information to this or any other agricultural topic please contact the Hopkins County Extension Office at 903-885-3443 or email m-villarino@tamu.edu.

Chamber Connection for 7/6 by Butch Burney

How did livestock breeds get domesticated? by Mario Villarino