The SSHS Wildcat UIL Academic Team competed at the Region 2 UIL academic championships this past Friday and Saturday, April 22 – 23. Wildcat competitors finished 2nd place overall with 190 points. Highland Park took first with 245 points. Hallsville finished 3rd with 128 points. 10 SSHS students qualified for State UIL in 7 events. The State meet will be held at UT Austin on May 5 – May 7. 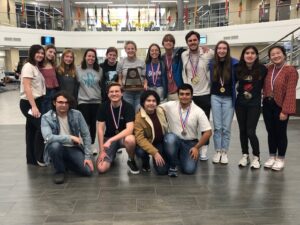