The Sulphur Springs Lady Cats traveled to Pine Tree Tuesday, looking to wrap up their district schedule with a perfect record. The Lady Cats also moved up one spot in the weekly rankings, entering the game ranked No. 7 in the state. 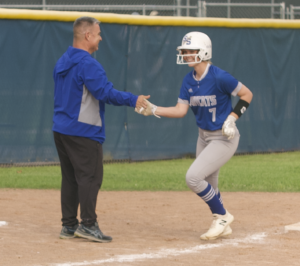 Parris Pickett hit a solo shot in the top of the 2nd Tuesday, giving her team and early 1-0 lead.

Parris Pickett got the offense started, hitting a solo shot to leadoff the top of the second. Kinz Smallwood followed with a walk, before later coming in to score on a sac fly from Anahi Velasquez, pushing the lead to 2-0.

After a quiet third inning, it was once again Pickett who got the offense going again, leading off the top of the fourth with a single. Due to errors on the play Pickett was able to move to third, where she was brought in on a Smallwood single.

Velasquez kept the run going, hitting a single to put runners on first and second. Later in the frame, now with two outs, Jadyn Harper came up with a huge double, bringing in both runs and extending the lead to 5-0.

The Lady Cats added one more run in the top of the fifth, before both teams went silent in the sixth inning. Entering their final inning of regular season play, Sulphur Springs didn’t take their foot off the gas, adding another four runs in the top of the seventh. Bryant closed things down in the bottom of the frame, securing the 10-0 win.

The Lady Cats had a great day offensively, scoring 10 runs on 13 hits. Smallwood led the way, going 3-for-3 with one walk, two runs batted in and three runs scored.

Just behind her were Pickett and Velasquez who each had two hits. Pickett had a home run, as well as two runs batted in and two runs scored, While Velasquez also drove in two runs.

Harper, Addison Caddell, Bryant and Tia Nash each had one hit, while Harper and Nash each drove in two runs.

Chamber Connection for 4/20 by Butch Burney