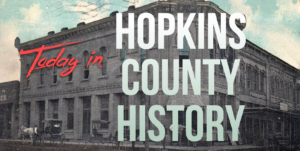 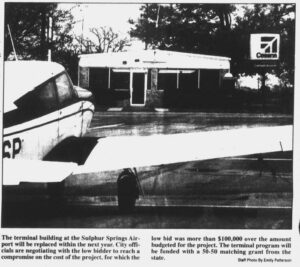 1979– J.D. Franklin served his last day as Sulphur Springs mayor before handing over the reins to Millard Glover. During his career, JD served as Hopkins County’s first black commissioner (1973), Sulphur Springs’ first black mayor (1979), delegate to the Ark-Tex Council of Governments (late 1970s, mid-1980s), Chamber of Commerce Civic Improvement Chair (1983) and more. In 2019, the city named his own street after him.

1984– City council members withdrew $200,000 from the yearly budget that had been allocated to refurbishments for the public library, and released the funds to other projects. The city circled back to library renovations in 1997.

2001– The city found that bids to redo the terminal at Sulphur Springs Municipal Airport KSLR were approximately $100,000 over budget. Committee chairman Roger Elliot dreamed one day of a large waiting room and open area for those entering and exiting the terminal as well as an airport manager’s office, flight planning area and vending machines. Elliot’s dreams may sound familiar now, but back then, the airport was little more than a metal barn.

What do you remember about April from the past?
By Taylor Nye. Information via original research and the Hopkins County Echo
previous post