The bats were alive from the very beginning for the Lady Cats, as Reese Ragan hit a one-out double in the top of the first. Addison Caddell followed with a single, before Crimson Bryant drew a walk, loading the bases. 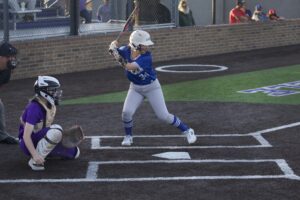 Addison Caddell hits a single early in the Lady Cats 4-3 win over Hallsville.

Despite loading the bases with just one out, the Lady Cats weren’t able to make Hallsville pay, as a pair of strikeouts left the runners stranded. Bryant opened the bottom of the first by hitting the first two batters she faced, though she got out of the inning unscathed, striking out a pair of batters in the process.

Neither team was able to get any offense going in the second inning, but Bryant kept her strong play going, striking out the side in the bottom of the frame. The bottom of the third was when Hallsville got on the board first, scoring on an error to take a 1-0 lead.

In the top of the fifth Tia Nash woke the bats back up for the Lady Cats, hitting a leadoff single on a line drive to center field. Jadyn Harper followed with a single of her own, putting the tying run in scoring position. 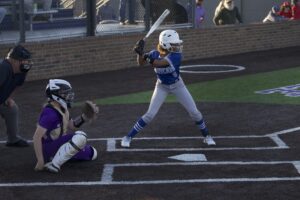 Jadyn Harper had a great game Friday, going 2-for-4 with a pair of runs scored.

Later in the frame Caddell came up with a double, her second hit of the day. Nash tried to score on the double, but was thrown out at the plate.

What could have been a rally killer proved not to be, as Bryant followed with an RBI single, tying things up at 1-1. Sulphur Springs kept their momentum going in the top of the sixth as well, when Kinz Smallwood reached on an error to start the inning off.

Katie Johns followed with a walk, putting runners on first and second with no outs. The runners were able to advance to second and third later in the frame, bringing Harper back up with a chance to take the lead. Harper hit a single up the middle, bringing in both runs. The center fielder made an error trying to field the ball, letting the ball get past her. Harper, who was springing out of the box, made her pay for the error, coming in to score and pushing the lead to 4-1.

Going into the bottom of the seventh, Bryant had a three-run lead to work with. After allowing a leadoff single, she forced a strikeout and a ground out, needing just one more out to get the win.

Hallsville refused to go away, hitting back-to-back doubles to make the score 4-3. With the game-winning run at the plate, Bryant buckled down and got the strikeout, putting the game away and holding on for the 4-3 win.

Bryant got the win for the Lady Cats, going all seven innings. She allowed just four hits and three runs, only two of which were charged as earned runs. She also struck out 13 in the process. 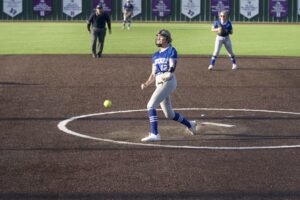 Crimson Bryant had a great day on the mound, striking out 13 batters in the complete game win.

Harper and Caddell fueled the Sulphur Springs offense, each going 2-for-4. Harper also drove in two runs and scored twice, while Caddell also had a double.

Ragan was 1-for-3 with a walk and a double, while Bryant was 1-for-3 and Johns was 1-for-2. Both Bryant and Johns’ each drew one walk.

The win pushes the Lady Cats’ record to 16-1-2 and makes them 7-0 in district play. They will look to stay undefeated in district play with a pair of home games this week.

Sulphur Springs hosts Longview Tuesday, before hosting Mount Pleasant Friday. The varsity is set to begin at 6 p.m. in each of those matchups. Stay tuned to Front Porch News for coverage of both games.